There are an infinite number of ways to design a kite. That being said, there are also a few core parameters that designers will consider during the initial stages of development. One of these is Angle of Attack.

What is angle of attack?

Put simply, it is that angle of the middle of the canopy of the kite if it’s parked at 12 o clock. Clearly you can change the AoA by sheeting the bar in and out so in order to discuss and measure 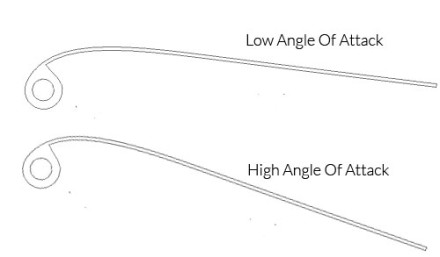 In order to measure and compare AoA across different kites, we need to talk about a “built-in” or “neutral” AoA. Neutral AoA refers to the angle of the kite when all four lines are the same lengh (usually when you have your kite fully powered and your bar pulled all the way up to the chicken loop). AoA is measured in Degrees with 0 Degrees being a kite that is perfectly horizontal when parked at 12.

Kites with a high AoA are typically most suited to waves and/or wakestyle. 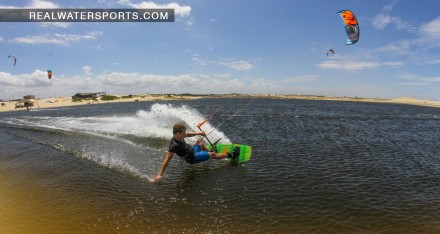 Kites with a low AoA are typically most suite to racing and speed!

What AoA is right for you?

That depends on how you ride. Here in Cape Hatteras we divide our team between wakestyle and waves so kites with a high or medium AoA are more popular. These include kites like the Slingshot RPM, Liquid Force Envy, Best TS, etc…

For most riders, a kite with a medium AoA offers a good balance and is a great choice.

Why don’t kite brands provide AoA stats with every kite?

Aeronautical engineering is a complex science. In order to try and understand more about the kites we all ride we are isolating various aspects of kite design and discussing them in detail.

The reality is that there are so many subtle forces at work that its hard to put an exact number on the AoA. Arc shape, luff size, wingtip shape, aspect ratio and many more things all affect how your kite flies. Boiling those details down to simple numbers isn’t realistic…. yet.