Touring the Rhode Island Coast on a Foilboard 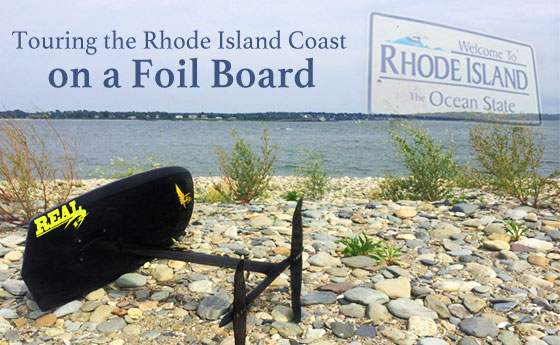 Rhode Island is not known for its wind in the summer time. Sure there are a few windy days here or there, but growing up I remember always wishing that there was just that one notch more of breeze. But on a recent trip back home, everything changed.

I started kiteboarding with the foilboard this spring and found myself lusting the sub 20mph conditions to get out there and hone my skills. A lot of friends gave me a hard time since they said it is the ultimate board for “mowing the lawn” and riding back and forth. No matter how much I described the amazing feeling of floating over the water and ripping up and down wind, very few gave it the time of day.

On my recent trip to Rhode Island, I was determined to unlock the touring potential of the foilboard by going back to ride from some of the spots where I learned to kiteboard. With summer sea breezes running from 5-15 mph, I assumed that I could sneak a couple sessions in. What I did not expect was to ride seven out of seven days on the foil and a 9m Liquid Force Solo.

My first few days I rode off of Deep Hole in Matunuck. Despite the rocky coastline, Deep Hole provided for a quick step off to deep water and I could ride some small rolling swells while the crowds of people on the deck of the Ocean Mist (best beach bar ever) went completely nuts. After a day or so of riding off shore of the Ocean Mist and going up to Green Hill Beach, I decided to go scout the flat water inside of “The Wall” by Point Judith. In all my years of kiting in Rhode Island, I had never ridden this mile long slick. From “The Wall” my tour continued around the corner to check the surf on the back side of Point Judith and then back to land at the Ocean Mist for a few after session beers.

Next on the foilboarding RI tour was to hit up Narraganset bay off of Newport and the Sakonnet River in Portsmouth. I wanted to ride off of Ft. Adams since it has a huge grassy launch and you can hop right out in the middle of the Newport Harbor but with Folk Fest kicking there was no access. I kept cruising Ocean Drive up to Brenton Point State Park as it has a similar set up with big grassy launch. There are tons of one line kites there and they were loving seeing the 9m Solo get lit up. On the tour of Narraganset Bay off of Brenton Park, I did a speed run to the North and rode off Ft. Adams, reached across to Jamestown and then ended up racing a sailboat across the mouth of the bay back to Brenton Point.

Every day I was riding, I could not believe how great the wind was and then remembered that if I was not on the foilboard, I would be marginally powered on a 17m. The afternoons would come around, the trees would be lightly swaying in the sea breeze and I knew the foil session was on.

My final session took place off of Sandy Point in Portsmouth. This is right across the river from a very popular windsurfing spot called Fogland. I rigged up and hit the water to see a couple of windsurfers schlogging around at Fogland waiting for that few extra knots that never turned up. With the South breeze I toured the far coast of the river and went north into Tiverton a couple miles. At the north part of Tiverton, I started the five mile up-winder to Little Compton. The rustic farmland that is peppered with old school estates and vineyards is a sight that is truly unique to Rhode Island. At 3rd beach in Middletown I gave a wave to my old stomping grounds, where I taught windsurfing in my highschool days. I then turned for the downwinder back to Sandy Point in Portsmouth.

Tired from 7 days of kite foilboarding, I recognized that by this time next year I would not be the only person touring the Rhode Island coast on a foilboard.

Ready to start your own foilboard journey? Check out our selection of foilboards or contact us to learn more.