What is Rusty Torsion Spring Technology?

Spring is in the name:

In surfing it is all about the feel. If a board feels bad then it gets immediately written off, and you and all of your friends will never touch it again. The Rusty Torsion Spring has a whole new feel and there is a lot of spring out of your turns. When you release a turn, you will accelerate out of your turns with a lot more speed than poly. Same goes for the pump off the bottom, which you will get more down the line speed than you’d expect.

The Rusty Torsion Spring has a buttery feel. Some people have said that it has the dampness of poly, but it is actually a lot better than that. Poly boards feel damp and dead after a hard year of use, while the Torsion Spring feels damp and lively throughout its lifespan. If there is any ripple on the wave face, the board cuts through it and generates speed down the line.

Light as a feather? Not really:

Rusty is claiming how light this construction is. We actually thought that is was not all that much lighter than a PU/Poly of the same board. Some epoxy boards are too light and can feel nervous. The Torsion Spring is heavier than other brand’s epoxy boards, and we thought that was a good thing.

Solid as a rock:

We have been surfing our demo Rusty Smoothie Torsion Spring for a year. It has traveled on airplanes a few times and been pounded on by surfers of all ability levels. There are still no dings and only minimal heel dents in this board. We actually squeezed the rails as hard as we possibly could to see if we could put a dent in it, and we failed. Any other board that felt this “hard” in your hands, rode like it was made out of concrete. The demo that we have rides better than the poly, and it still looks like new.

Why is it so strong?

Normal fiberglass schedules for building PU/Poly boards are 2 x 4oz deck layers and 1 x 4oz bottom layer. On the Rusty Torsion Springs, they vacuum bag the deck and the bottom to make sure the lamination is 100% saturated and also all excess resin (weight) is taken out of the board. This means they can use more layers of stronger cloth and still end up with a lighter board. Standard Torsion Spring layup is Deck: 4oz bi-axial (non-woven 45 degree offset fiberglass that does not restrict torsional flex) topped with a layer of 6oz E-glass. On the bottom, they use 1 layer of 4oz D-glass, and 1 layer of 4oz E-glass.

The Carbon Kevlar tape used along the rail resists buckling. The way it wraps onto the top of the tail in the fin zone frees the tail up and provides extra rebound out of turns. 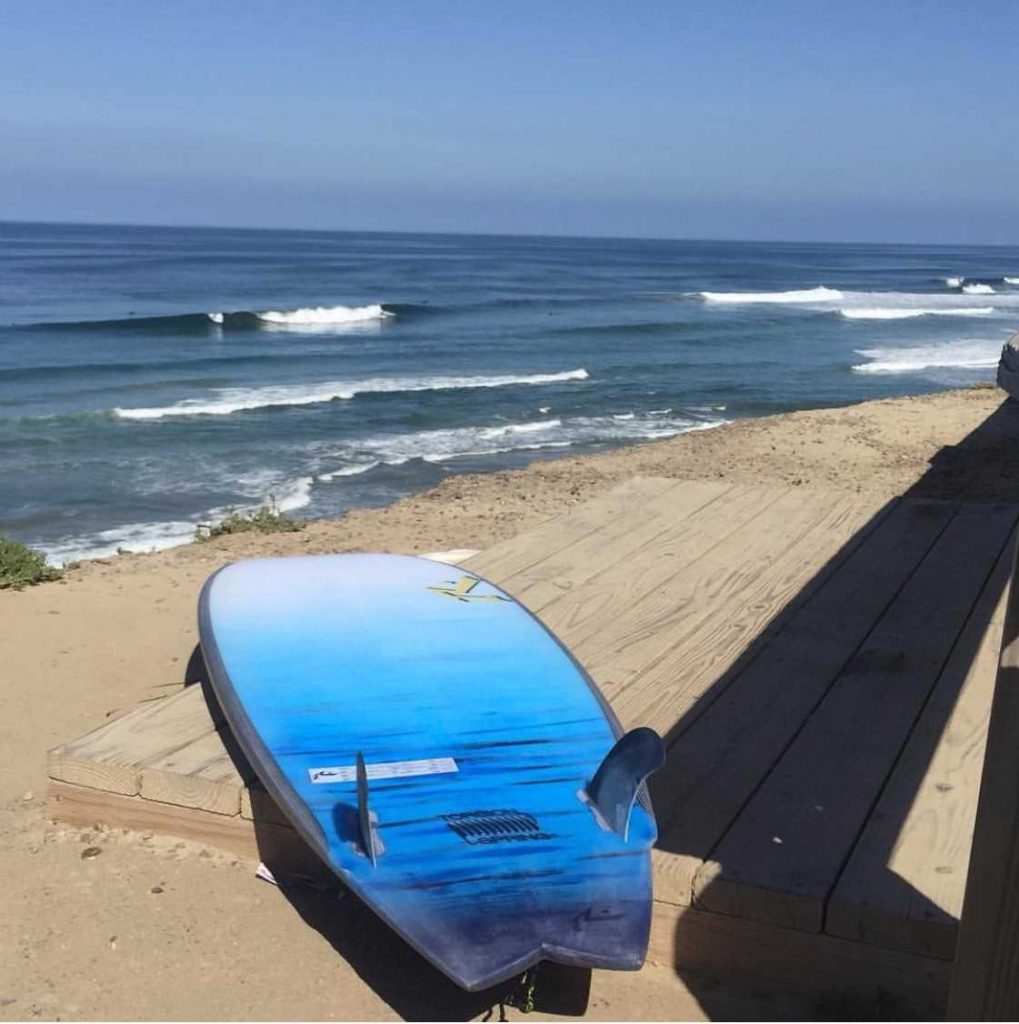 The Rusty Torsion Spring construction features a proprietary waterproof blank. Rusty calls it WPC (waterproof core). It is also known as a XTS blank (extruded polystyrene). This means it won’t suck in a pool full of water the first time you ding it. In fact, you don’t have to get out the water, keep sessioning! You should repair the ding eventually so you don’t get water trapped between the blank and the glass, but the ability to never miss a session due to a ding is pretty nice. These blanks are custom designed and engineered by Rusty, taking into account flex, weight and impact resistance. 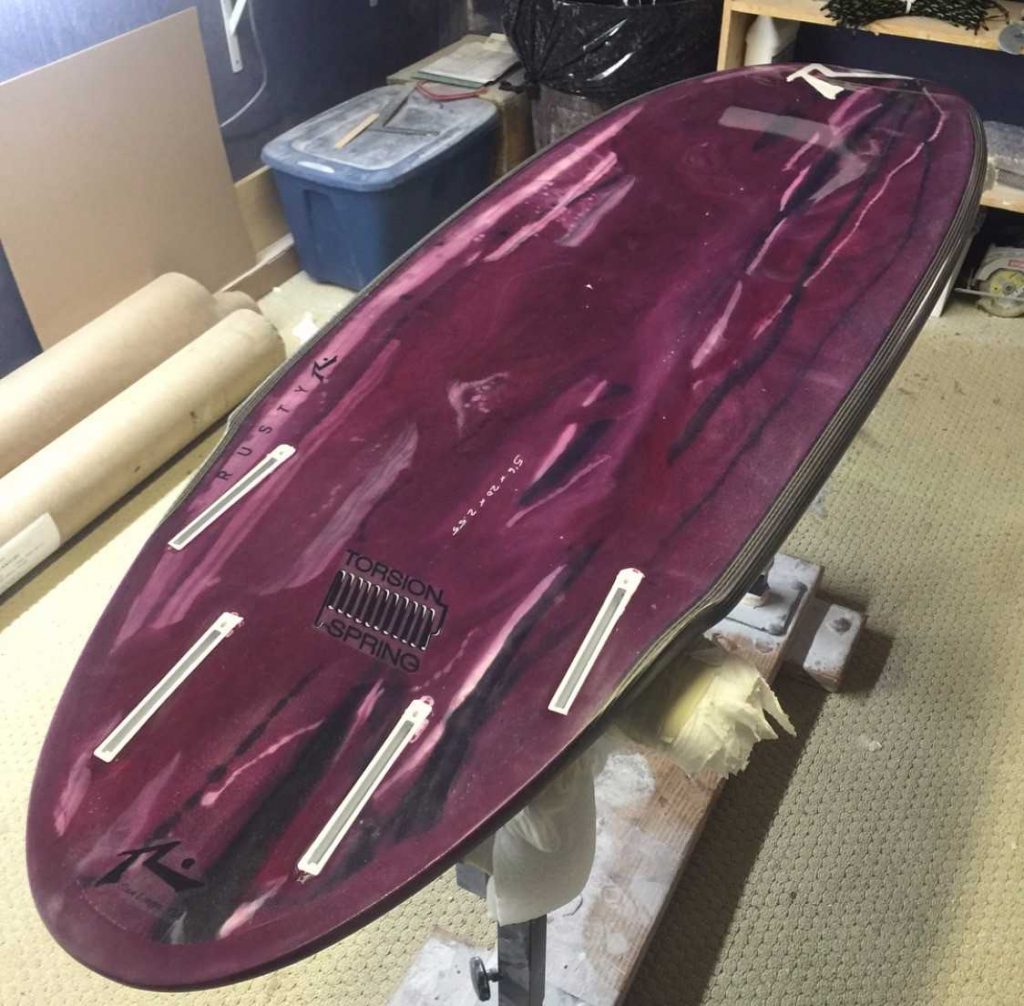 We have a demo PU/Poly 5’10 Smoothie and a Torsion Spring 5’10 Smoothie. We tested them on the same day with the same fins. The most notable difference is that the Torsion Spring feels damper cutting through the water, more lively under your feet when you accelerate down the line and has better response out of turns. The deck on the PU/Poly Smoothie was compressed in where your feet are and it is noticeable that the deck on the Torsion Spring is very close to dent free and does not give under pressure.

Torsion Spring rides like a poly, pops like an epoxy and lives in a space that is totally unique to Rusty and their new construction. This construction can be appreciated by any ability level surfer and if you are tough on your gear, you should seriously consider getting a Rusty Torsion Spring.

…And the question you all want answered….

Well quite a bit. On paper, they sound similar. They both are stringerless, Epoxy boards that have some sort of high tech materials to give them strength and both are marketed as lighter than poly . On the water, they feel really different.

Carbon Wrap construction is lighter and has a feel through the water consistent with lighter boards. Lighter boards work really well in small to medium size surf, and also on smoother wave faces. Carbon Wraps are lightweight, really fast down the line and super responsive rail to rail. The lighter weight Carbon Wrap will feel the imperfections in the waves, and on bigger surf with higher speeds, it can feel a bit nervous. This is why you see most surfers using this construction in small to medium size surf, but not larger surf. Carbon Wrap is more resistant to dings and dents than a standard PU/Poly, but less resistant when compared to Torsion Spring. Carbon Wrap is one of the best high performance epoxy constructions on the market, and after testing them side by side, it’s obvious that Carbon Wrap is aimed more directly at high performance, where the Torsion Spring design is aimed at a more equal blend of performance and durability. The weight difference of comparable …Lost boards below tells the story. You can see the difference being 1.3lbs in the Lost board PU/Poly vs. Carbon Wrap, where in the Rusty boards (above), the weight difference is only .4lbs.

We have found that the Carbon Wrap really makes a big difference for people that want to have the max performance out of their boards. Better surfers can really appreciate a performance board that is light and lively. Also, Carbon Wrap is killer on grovelers as it cuts a lot of weight from the smaller high volume boards. In small waves, you can really appreciate the get up and go.

The Rusty Torsion Spring excels in surf with more bump on the face because of the dampening effects of this construction. Torsion Spring is best suited for someone that wants to have a board that is going to be a performance improvement over poly, take a ton of beatings and still look and surf like new afterwards.

Rusty Torsion Spring construction is currently available in the following stock models: Smoothie, Yes Thanks, Model 8, Dwart and Heckler. It will soon be available in the new Dwart Too and SD shortboard.

You can also custom order any Rusty model in Torsion Spring with custom colors through REAL by contacting a REALpro.