Wave of the Day: Getting the Shot

Everyone thinks that being a pro surfer is all about hot days on the beach, Mai Tais at sunset, and surfing perfect waves. The reality is starkly different. Hear what Brett has to say about getting the shot for Surfline’s Wave of the Day on March 21.

REAL: Your Wave of the Day shot on Surfline was mental. How early were you up on Tuesday?

Brett: Woke up at 6 on Tuesday, made some coffee, and swapped out my barrel boards in my truck from the day before, for some shortboards. I was headed out in the dark, expecting to find some chest-shoulder high rippable waves. 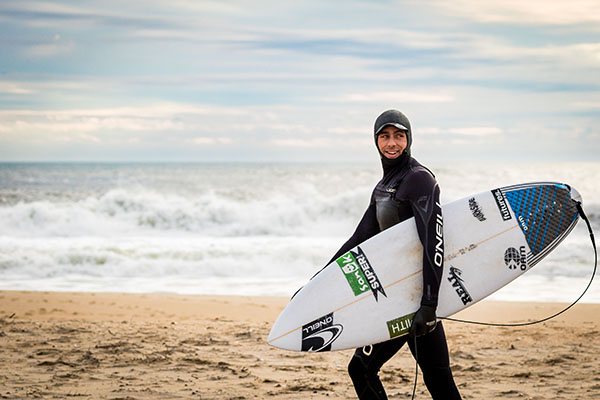 REAL: How many texts did you send and receive before your first session?

Brett: No idea how many texts and calls I made before we surfed. Jeffrey was checking around Rodanthe, and I was checking Buxton, and on the phone with guys all over trying to decide where would be best. I was heading north between Avon and Rodanthe when Jefferey called and said we should probably go back to Buxton, because the video clips I sent him looked bigger, so the decision was made and I went back and found the one bar that wasn’t totally closed out, then he met me.

REAL: Tell us about the conditions and your board choice?

Brett: Honestly I would have likely ridden one of my barrel boards if I’d left one in my truck. The bigger sets were a foot or two overhead and really heavy, plus the current was still sweeping, and those things paddle better than my short boards. I wasn’t going to go home and get one though, so I rode my 5’10” x 18.5″ x 2.15″ round tail Burnside model from SUPERBrand. Boy am I glad I did cause I likely wouldn’t have stuck that air on a barrel board.

REAL: Tell us about your video guy?

Jeffrey O’Neil moved down here last Spring, in hopes of us getting to work together more and build his resume as a videographer. He’s really good at not missing clips and him and I have a great partnership going. I’m never in the water worried that he’s missing clips, and that helps my confidence in trying to pull bigger moves. I’m thankful to have him here at home and don’t know where my career would be without his help. That clip of my air yesterday probably wouldn’t exist without him living here.

REAL: When you saw you got the clip, what are the next steps?

Brett: I came in from that wave, one because the current was bad and I was going to have to walk back up to paddle out anyway, but two because I really wanted to see how the air looked. I was so content, I could have ended the session there, but there was still some opportunity so I went back out.

Unfortunately, it got bad kind of quick, so we broke for breakfast. I had Jeffrey place my order at the restaurant while I went home to get my laptop and make sure we didn’t lose the clip to a corrupt card or something random later that day. I got to the restaurant and downloaded the clips to my laptop, then filmed the good one with my phone and texted it to Surfline to see if they wanted it, while I ate (engulfed) breakfast.

My wife Casey was driving through town and stopped by to take my laptop home, while Jeffrey and I headed back out looking for a sandbar for the afternoon. We got the confirmation Surfline wanted it, so I called Casey and she uploaded the file from home to Surfline for us.

Then another 5hr session ensued before I came into a text from Marcus Sanders at Surfline asking for a quote about the air. I texted it over to him while still in my wetsuit, and when I got home they had posted it all over. 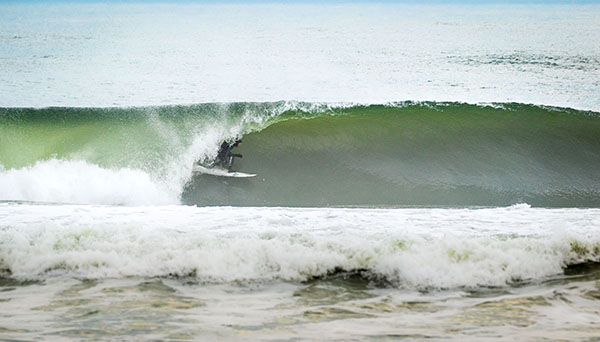 REAL: Pro surfing is starting to sound more like a job than a vacation. What was the hardest part of this day?

Brett: Haha, it’s so much fun, but yes it is a job still. There’s more to the professional side of surfing than most people understand, for someone like myself at least. Sure I don’t “work” every day, but when I do, they are often 12-16hr days from surfing to editing footage, and multiple days in a row of that.

And then, in between swells, I’m still always spending loads of time just sitting in front of a computer editing Instagram videos, organizing content, and planning for future stuff. There’s even differences between my Instagram and Facebook videos, I have to fit the Instagram ones to 1min, and the Facebook ones I’ll do longer sometimes, but little things like that that take time, no one realizes. I’m not complaining, I love it all, from the long hours of paddling and surfing, to the long hours of editing, it’s my dream job. But, it definitely is a lot different and a lot more work than it likely looks from the outside.

The day before that air clip, I don’t know how many hours I surfed or how many miles I paddled, but I pushed my self past the point of exhaustion in relentless current, trying to make something happen, and it didn’t… Fighting the current so hard trying to get one more good wave for the day, fighting through muscle cramps, spasms, and shakes, cause my body wanted to be done, but I only had 1hr of light left and had to make something happen with it.

I came home defeated, felt like I’d been hit with a baseball bat, so tired I could barely eat and frustrated I’d spent money to have Jeffrey film all day when there was no return for it (waves just didn’t turn on). But that’s how it goes sometimes… It isn’t all perfect waves and awesome times, and sometimes you put all of your energy and effort into it and get nothing in return but cramps and dehydration.

Persistence pays off though… I don’t give up easy, and those days motivate me even more, case in point, the next morning on my second wave of the day I did an air of a size I haven’t landed before. Honestly, all the pain and frustration from the day before was gone the moment I saw the waves the next morning, but it really was a distant memory when I landed that air and came in to see Jeffrey had nailed the clip too.

It’s moments like that, that I work so hard towards. And to share that moment of getting the clip, with my friend who has put so many hours in behind the lens, through some pretty bad sessions I’ve asked him to shoot, was so epic. I wouldn’t have wanted anyone else to get that shot. 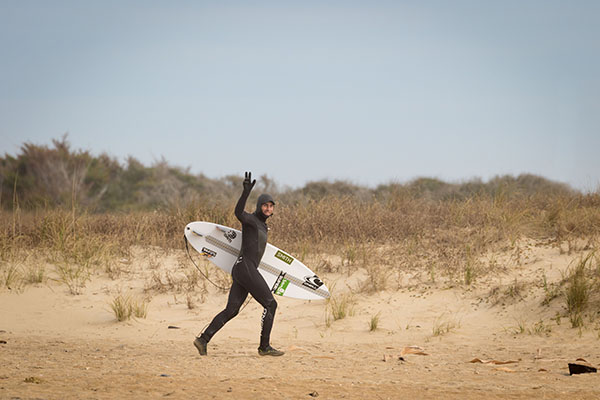