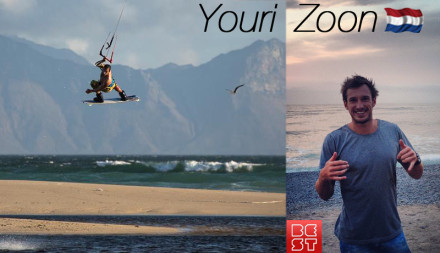 We sat down with Best Kiteboarding team rider Youri Zoon to talk c-kites, hybrids and the elusive middle ground. With 2 world titles under his belt – Youri knows a thing or two about what makes a great freestyle kite.

Pete: What are the most important characteristics in freestyle kites?
Youri: I am always looking for a kite that I know where it is so that I can do my tricks with my eyes closed. I want to have a kite that travels far but also has a moment of slack. If the slack is too big, it will drop you out of the sky, if it’s too small it’s too hard to do the passes.

Pete: So you’re looking for that middle ground all the time?
Youri: Exactly, I want to have it not too much but just right in the middle.

Pete: You are riding C-Kites right now but I know in the past you have ridden hybrids. How do they compare?
Youri: The c-kite has more slack and doesn’t travel as far as the hybrid kite. But on the c-kite in conditions that are not 100% good or if your takeoff isn’t perfect, the c-kite has the advantage of still being able to do the passes or grab a little longer. On a hybrid kite it’s a lot more work to have it set up right for the double passes or a long grab.

Pete: So you find c-kites to be more forgiving when it comes to freestyle?
Youri: Yeah, I would say that

Pete: I know you recently switched to boots for your heats in competition, do you always ride boots now?
Youri: From the moment I started in boots I won a competition straight away and from that moment on I never changed back to straps again. For me it’s that little bit extra, being able to have those hard landings, go big or go higher and that’s what I’m looking for.

Pete: You have a pro model with Mystic – the Youri Zoon Pro – why did you choose the Shadow as your pro model of choice?
Youri: it’s the middle way. It still gives you the support for everyday riding or sessioning when it’s really strong wind but still gives me the ability to move around really freely – which is what I want to have in competitions.

Pete: What other styles of riding do you do?
Youri: I really enjoy riding a strapless surfboard, just gives me a lot of freedom in what I do and it’s totally different from riding in boots and doing freestyle.

Pete: Do you use the same kites for waveriding as you do for freestyle?
Youri: I use the Best Cabo (which is a wave kite) and specially made for wave riding. It’s a nice solid kite that I like to ride in the waves and for going down the line.

Pete: I guess you can use your c-kite as well though for wave riding?
Youri: You could but it’s not as good as a dedicated wave kite. The wave kite will flip more easily around the corner with not that much power while the c-kite pulls hard through the turns, which can pull you off the board. It’s nice when the kite just flips over and doesn’t have too much power in the corners.

Pete: Tell us about one of your favorite kite spots that you have been too in the last year.
Youri: I really like to ride in Brazil, I have been going there every year for 7 years. Steady winds every day and great lagoons. In the beginning of June I’m going to Hatteras for the first time so maybe that will be a new place on the map for me.

Pete: Thanks Youri – looking forward to having you here in Cape Hatteras in June.
Youri: Me too. Have a good one, Cheers.