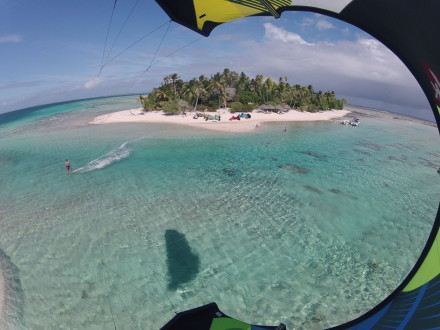 REAL has always been known to do things big, and with style. Anyone who has been on a REAL Travel adventure since the brand’s inception knows this to be true. So it is no surprise that REAL Ninamu 2012 was first class and five-star all the way. 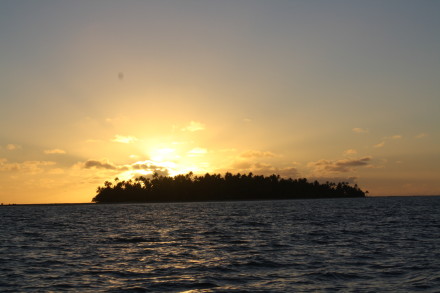 Our crew consisted of Mark and Noelle Mahoney, Pete and Kate Massaro, Jon Campbell and Viktoria Rogers. With all of us traveling from different parts of the States, the most logical meeting place was the Papeete Airport (PPT) on the island of Tahiti. Pete and Kate, as well as Jon, flew into Tahiti a few days early to explore the island before heading to Ninamu. Our meeting was seamless and shortly after landing and clearing customs, we were loaded into a van and driven to our private charter flight bound for our final destination of Tikehau. 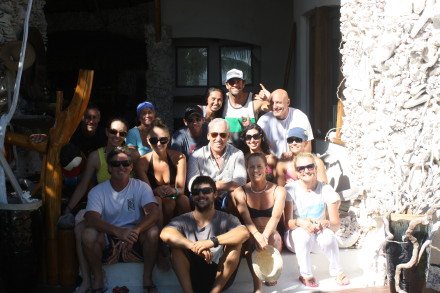 Tikehau is one of the seventy-eight atolls that make up the Tuamotus, the largest group of coral atolls in the world.  Varying currents, poor charting, and frequent sudden storms make navigating this group of atolls very difficult and has lead to them being referred to as the Dangerous Archipelago and The Labyrinth by sailors. Lucky for us, no difficult water navigation was needed and our charter flight touched down on the Tikehau airstrip with the Ninamu welcoming committee already waiting for us and our gear, with a truck parked at the edge of the tarmac. All of the REAL Ninamu guests were greeted by Marty and Mick, who introduced themselves and placed fragrant Polynesian leis on all of the REAL Ninamu guests. Within minutes, we were beginning to load our gear onto the boat for the last leg of our journey to the resort. As the realization that we had actually made it started to settle in and we were beginning to take in more of our surroundings, we all noticed the same thing…it was WINDY! 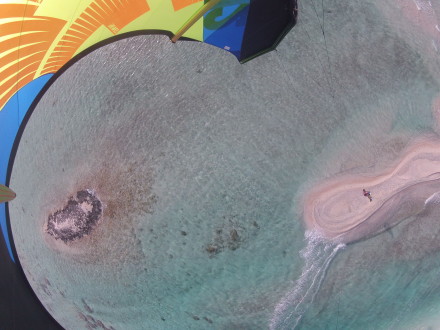 We inquired with Marty and Mick on the direction that we would be heading in the boat and as they pointed downwind we knew there was only one thing to do. We had to kite to Ninamu! The group unanimously agreed that a downwinder to our final destination had to happen. So we halted the gear loading and each person began organizing his or her kit. Boards were built at a feverish pace and we were rigged and on the water in less than an hour from touching down on Tikehau.

The water is such a beautiful color that is hard to describe using words alone. The vibrant electric blue/green Jello/koolaid combination color actually makes you smile and stare in awe each time that you lay your eyes on it. Needless to say our entire crew was grinning ear to ear for the entire downwind session to Ninamu. After an hour or so on the water, taking our time to explore waters of the lagoon and the shoreline of the Tikehau village, we landed on our own private beach on Ninamu where we were greeted with plates of fresh Ahi sashimi and cold Hinanos, a local Tahitian brew. 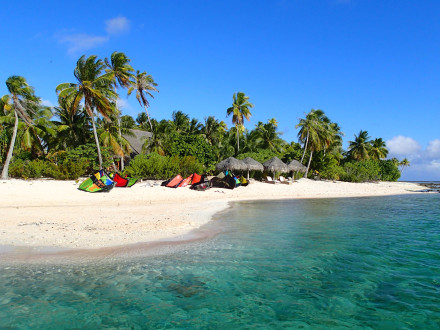 All of the guests casually slipped into island style living by packing away their shoes, breaking out the flip-flops and settling into their plush and unique Tahitian bungalows. Greta, Christiane, Mel, Jill, & Allisya were showing us around the island making sure that everyone was comfortable and familiar with the amenities. But the wind was still up and our kites were still rigged so it was back on the water for the kiters while the two non-kiters in the group sipped drinks on the lounges as the sun sank into a painted Tahitian sunset. I can honestly say that in all my years of kite travel it was the best and most exciting arrival and first day ever! 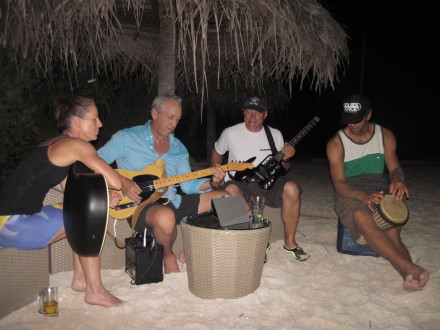 For the following days the wind was solid and our main focus was kiting. The downwinders within the Tikehau Lagoon are plentiful with remote secluded beaches scattered along the upwind edge of the atoll. We were able to explore a few different launches with smooth flatwater slicks on the leeward side of each site. Always ending at our private beach on Ninamu for refreshments and meals or snacks. 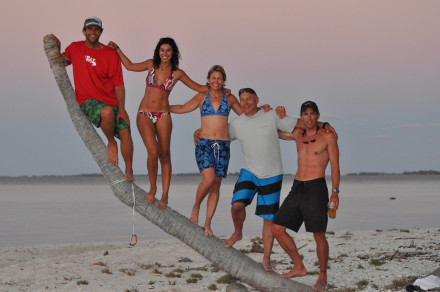 The lighter wind in the mornings allowed for a casual breakfast followed by fishing, yoga, or just simply exploring around the small motu (island) that we were calling home. We found and learned about creatures both in the sea and on land that were completely new to all of us. From unidentified sea snake looking invertebrates in the water to the beautiful blue and orange Coconut Crab on land, which is an endangered crab they are helping to protect on Ninamu, that can cut through a coconut (or a beer can, as we saw demonstrated) with its claws and eat ALL of the meat from inside of the nut. 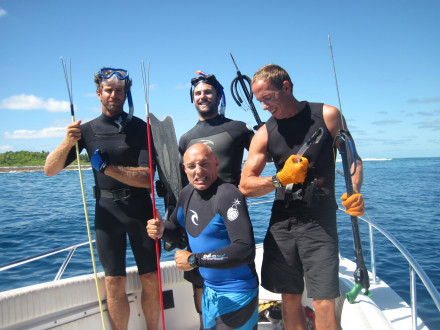 When the wind lightened up, the snorkeling became world class. The pass, outer edge reef, coral garden, and without a doubt a highlight of all of the guests’ experience, swimming with the Manta Rays, were the most spectacular. The fishing is also something that you cannot pass up on during a stay on Ninamu. We pulled in Black Trevally, Ahi Tuna, Big Eye Tuna, Mahi-Mahi, and Paddle Tail Snapper just to name a few. Jon, Pete, and I joined Colton (aka The Blue Water Hunter) for a few spearfishing expeditions at “The Snapper Hole”. Where, as Colton would say, “The hunting is rich, and the bounty plentiful.” The hunts were super exciting and always brought in our big grey friends to pay a visit… 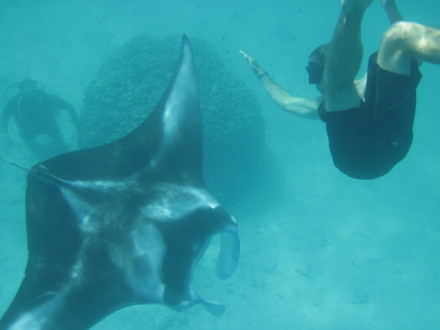 Each and every day our group became more and more adjusted to the casual pace of Ninamu living and wished that it would never have to end. But all good things do come to an end. And so on our final day we were greeted with one final windy morning, allowing us one last downwinder in paradise. 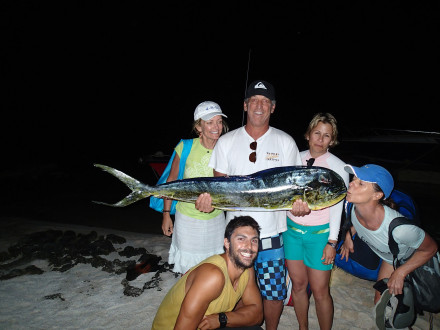 After saying our goodbyes to the wonderful Ninamu staff we headed back to the tiny Tikehau airstrip. Arriving just in time to watch our private charter touch down on the runway. As we taxied to the end of the runway Jon, being a pilot himself, asked our pilot if we could alter our flight path to buzz Ninamu at 500 feet. The pilot agreed with a smile. So as we took off, the plane banked hard left and we soared over Ninamu with all of the staff out on the beach waving to us as we ascended into the clouds. 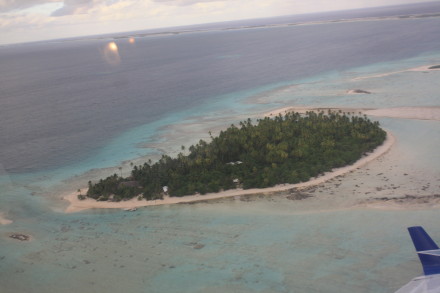 The REAL Ninamu 2013 trip is coming together already! If you are interested in joining us next year, please email REALPro@realwatersports.com. 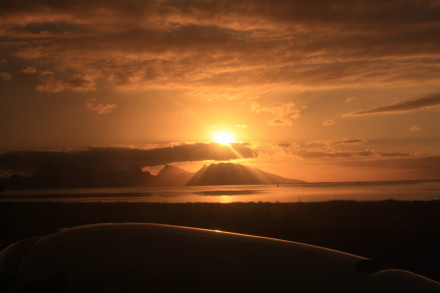