A boat whose hull is fitted underneath with shaped vanes (foils) that lift the hull clear of the water to increase the boat’s speed.

Invented in 1898 by Enrico Forlanini, the hydrofoil has been used in a wide variety of applications. They have been used on military ships, transport vessels, and even helped team Oracle win the America’s Cup. Soon you will see them coming to a kitebeach near you on what is widely known as a foilboard. 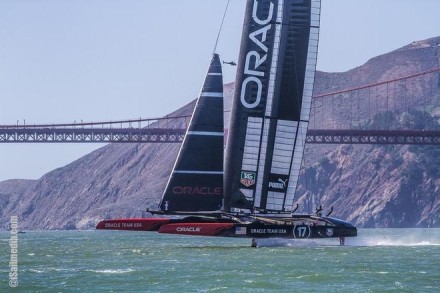 With their incredible efficiency, a foilboard can turn a sub par day into a stellar day. With the ability to go 25knots in 10knots of wind the foil certainly has some advantages. In addition the foil allows you to ride above the water surface, essentially floating in mid air. The feeling is serene and thrilling at the same time.

Hydrofoiling is all about one thing….the foil. Getting the right setup is really important and with a bunch of manufactures popping up, there are more options than you know what to do with.

I personally recommend the Lift foilboard by MHL Customs. They are based out of Puerto Rico and make some amazing custom carbon boards and foils. They have been making foilboards for the past four years and have just released their latest version. The best part about the Lift is that you can easily change out the foils for racing or recreational riding. As well you will be able to upgrade all parts without having to buy an entire new set up if the technology changes down the line. The 2014 Lift foilboards have been tuned to be very user friendly too. 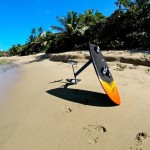 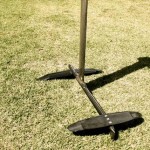 With the Lift, the board, strut, fuselage and foils disassemble for easy pack-up. As a beginner you’re looking for a stable low to mid aspect wing. They are easier to ride, more stable and will offer the easiest learning curve. There are many people that are racing on the mid aspect Lift foils since they are so much easier to ride. There are also high aspect racing foils made for speed. They go super fast, but they are really hard to ride, even for advanced foilboarders.

There are a few things to consider before heading out into the water on your new toy. First and foremost is the water depth. The foil rides about 3 ft below the surface of the water so making sure to have ample clearance is essential for the well being of your gear. Your first few sessions you’re going to want to have a bit of power in your kite so we recommend starting in 12-20knots of wind with a 12 or 10m kite. Even though the foil can perform in ultra light wind, you will want to be powered so you can edge against the kite as you normally do. Once you’ve mastered the foil, riding in ultra light winds with much smaller kites becomes the norm. Nick Leason, the owner and designer at MHL, rides a 7m kite in 8-35knots of wind on his Lift foilboard. 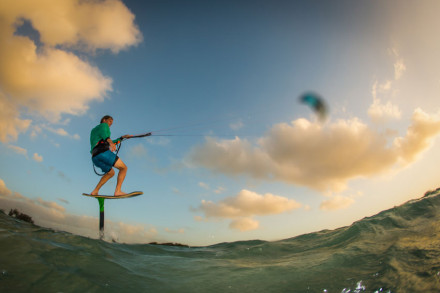 How hard is it?

I won’t lie, the foil can be very frustrating when you first get on it. The first session was quite the shocker, as I couldn’t foil for more than 10 ft at a time. With each session foiling gets easier and easier. By my 5th session I was confidently getting long smooth, silent rides, and I was amazed at the speed, upwind and downwind ability. I was still crashing but that is half the fun of learning something new.

The feeling of foilboarding is addictive because you feel weightless like you are flying. Almost anyone that can kiteboard should be able to foil after a few sessions. Make sure to bring a stocked cooler for after your first session. You will definitely earn those cold beverages!