In a winter where the National Park Service purchased the Frisco Pier back from private ownership and Spa Koru then purchased the Avon Pier to add to their Beach Klub facility, another major land deal has just been released to the public.

REAL Watersports, Inc. (REAL) has just officially released the announcement that they have purchased Canadian Hole (aka “Haulover Day Use Area”) from the National Park Service. While the purchase price is not being released, REAL is sharing their plans for their “Kite Hole” development and why they are taking the gamble on the sport of kiteboarding.

“This is a great move to solidify the sport of kiteboarding in Cape Hatteras. With the future of Canadian Hole up in the air (and up on the auction block) we felt like it was our responsibility to step in and make a move for the future of our sport.” – Matt Nuzzo – REAL Co-Founder and one of Kiteboarding Magazine’s “Top 10 Most Influential Kiteboarders in the History of the Sport”

“Ever since we opened REAL out of my garage in Frisco, REAL has always had a presence south of Avon. When we closed our original REAL shop in Buxton in 2008, everyone said they missed us being down there for spare parts, pumps or a new line set on the way to the Southside. REAL purchasing the Canadian Hole brings us back to our roots. Back to where it all started in the spring of 1998.” – Trip Forman – REAL Co-Founder and one of Kiteboarding Magazine’s “Top 10 Most Influential Kiteboarders in the History of the Sport”

One of the reasons this was basically a “no-brainer” for REAL were the vast array of already existing infrastructure and facilities already at Canadian Hole (aka “The Haulover” or now “Kite Hole”). These include:
1. Expansive 2wd friendly asphalt parking areas
2. Men’s, Women’s and Family Restrooms
3. Outdoor Showers and Changing Rooms
4. Ocean Access
5. Shallow areas for learning and the deepest water location along our entire coastline for foilboarding and mega loops gone bad.

*Put all of this in one place, plus add the historical significance of the location, and you have a recipe for a sports specific destination landmark. 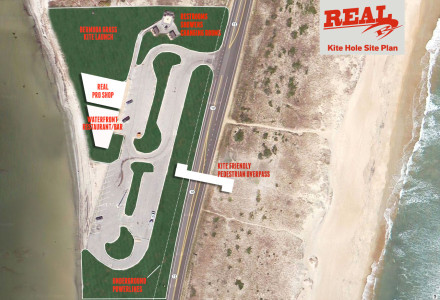 Prior to Kite Hole, kiters had to park on the side of the highway, then wind their way through a sea of sand spurs and 60mph highway traffic. The new Kite Hole parking area will allow easy and safe access to the Pamlico Sound with incredible lifestyle oriented amenities. Parking on the side of the road will still be permitted, but why give up the foot friendly parking area and fresh water showers. “It’s a lifestyle choice. Pure and simple. Kiters want better and improved launch sites. Kite Hole will set the new standard.” says Forman.

While this deal is just going public, many knew something was in the works and could see the writing on the wall this past winter. REAL has already installed new gear racks along the entire SW corner of the parking lot which will neatly organize kites, boards, harnesses and provide drying room for wetsuits, rashguards, towels, etc.

“Think of what they’ve done at the snow resorts. You just don’t pile all your skis and snowboards in a heaping mess at the lodge and then go inside and eat lunch. They have a specific rack and organization design for every piece of gear so it looks neat and adds to the experience. That’s what these new racks are meant for and this is just the beginning of what we plan for Kite Hole.” says Nuzzo.

What goes well with kiteboarding, kitesurfing and foilboarding? Gear, Beer and Food! In 2015, REAL plans to open a new restaurant, bar and kite pro shop onsite at Kite Hole. Part lifestyle, part a way to help pay the significant bills this new launch site will incur. “Without taxpayer dollars footing the bill, we had to figure out a way to make ends meet. We didn’t want to charge a daily usage fee or issue permits, so adding these facilities was a win/win for everyone. Users get to enjoy great food and drink onsite, plus can get new gear or their gear fixed by REAL tech pros.” – Pete Hardie – REAL Marketing Manager

The biggest “negative” feedback REAL is receiving is regarding the proximity of the power lines to the existing Canadian Hole (K-Hole) parking area. “This is something we have been educating kiteboarders about since 1998. It’s funny, people think it’s the National Park Service or Cape Hatteras Electric Cooperative that moved kiteboarding to Kite Point and kept windsurfers at Canadian Hole. It was actually REAL that did this in order to keep the kiters away from the powerlines. Now that we are moving onto that same space we have kept people away from, we had to come up with a plan that was user friendly and added benefits to the experience.” – Matt Nuzzo

Not to take the “norm” as the norm, REAL plans to work closely with Cape Hatteras Electric Co-op to submerge the power lines underneath the ground from “Old Road” southward to the “Buxton Slicks”. After that has been completed, they will then be installing a Kite-Friendly Pedestrian Hwy 12 Overpass at Kite Hole (K-Hole) to allow kiters to cross Highway 12 safely – with their kites in the air – and access both flatwater, foilboarding and surf kiting, all in the same session.

“Walking under the power lines with my kite still flying has always been my favorite way to enjoy my home turf and “go both ways” in one session. I’ve got to say, I definitely received a lot of heat the first time I did it from the NPS, Cape Hatteras Electric Coop and many other safety minded organizations. The new Kite-Friendly Pedestrian Hwy 12 Overpass at Kite Hole will open this freedom up to all kiters and bring an entire new generation of kiters into the ocean.” – Jason Slezak – REAL and Liquid Force International Teamrider – innovator of the original “Walk Under”.

This has to be the question on everyone’s minds. Will the creators of the original and timeless classic bumper sticker “Windsurfing has been Cancelled” put the proverbial final nail in the coffin and ban windsurfing from their new privately owned launch site?

“Absolutely not. The windsurfers who use this site are the lifeblood of it’s historical importance. While the parking spaces and orientation will change slightly, windsurfers can expect to receive at least the same number of specifically dedicated “Windsurfers Only” parking spaces as there are handicap spaces now, “ says Forman.

“We plan on letting windsurfers and other sports users use the area for overnight parking (car camping). We saw this happening all the time in the past anyway, and with limited NPS staff to enforce against this, windsurfers basically didn’t know if it was illegal or legal. Now it’s legal and when you add the bathrooms and showers, why even rent a house anymore? Kite Hole is the new budget minded Cape Hatteras camping experience!” – Matt Nuzzo

While there won’t be a daily usage fee or permit required to access Kite Hole, kiters will be required to watch a short 5 minute safety video and take a test on the “The Basics of Lofting : What Happens when you Pull the Trigger on the Beach”. This video and test will be administered at the current NPS trailer where ORV videos/permits are administered near the new Cape Hatteras Lighthouse site.

“REAL has always been about educating and teaching. ‘We Make New Riders Every Day’ has been our mission statement since day one. This short 5 minute safety video will unveil the myth of lofting once and for all and put the onus on the rider to actually pay attention to their actions once they hit the land. The popularity of Kite Hole will help distribute this video and educate the kiteboarding population on safer kite practices” – Pete Hardie

Kite Hole Grand Opening : How Grand will GRAND Be?

Kite Hole is OPEN effective immediately with basic lifestyle amenities that can be enjoyed daily (and nightly) by all users. This timing is perfect with the spring kiting season here and Easter week just around the corner. *As a reminder, all users must watch the short 5 minute safety video and take the lofting test prior to their first session. 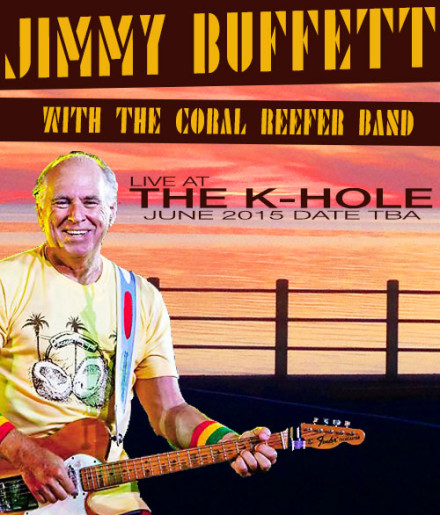 REAL is planning a Kite Hole Grand Opening and Ribbon Cutting Celebration in June of 2015 during the 2015 Triple-S Invitational, when the new Kite Hole Restaurant/Bar and Pro Shop are completed. Reports from several sources say that REAL has landed long time Surf/SUP/Lifestyle friend Jimmy Buffett to play LIVE for the Kite Hole Grand Opening and Ribbon Cutting. The exact Jimmy Buffett show date is still TBA but sources at REAL confirmed that they will fall within the 2015 Triple-S Invitational dates which will be released at this year’s event.