If you're tired of breaking surfboards - here is the solution 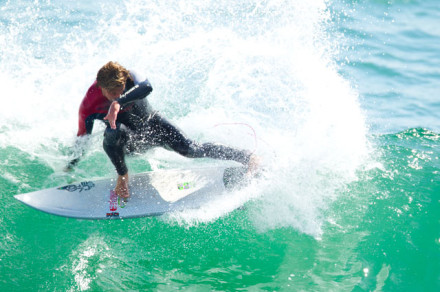 Earlier this year we met up with Ryan Carlson at Surf Expo. If you’re not sure who Ryan is – he’s one of California’s biggest rippers. Among other awards he won the “video contest” at the recent US Open Of Surfing for the best video part. At his home break in CA, he surfs a lot of closeout beach breaks and that means he does a lot of big airs! The result is a garage full of broken surfboards. It’s no wonder then he’s been on the hunt for boards that can take a beating but still feel lively underfoot.

Ryan recently found his perfect match and is now surfing for Lib Tech Waterboards and to say he’s stoked on the boards is an understatement. The surprising thing is how excited and stoked he is on the way the boards feel while he’s surfing (not just their strength). He says the boards feel as good as any board he’s ever surfed and it’s really helping him take his surfing to the next level!

We all know that Lib Tech’s Waterboards are strong but it’s taken some time for it to sink in that they surf really well!

Here’s a video of Ryan ripping in and around his home town. It’s a video from a year ago and he hadn’t yet switched to Lib Tech but it gives you an idea of exactly why he’s been breaking boards in recent years!