How to Choose the Right Fins

Rocking up to a solidly stocked fin wall can be daunting, to say the least. It’s no wonder many surfers shy away from trying to figure it out, never knowing what they’re missing. With so many people sending in positive comments about our article “How to Buy a Surfboard,” we felt it was time to flip the board over and tackle the fin equation. This fin article isn’t about “teching out” — it’s about finding an easy way to the right fins that will improve your surfing. Ask yourself the following questions to help narrow your fin choices from hundreds to just a few. – Trip Forman, REAL Watersports

1. What Type Of Fin Box Does Your Board Have?

This seems like the most obvious question. But then again, it takes half the fins off the table and lets you narrow your focus.

Just like surfboards, fins are sized to the surfer’s weight. Typical sizing starts at XS and goes to L or XL. By knowing where your weight falls into the manufacturer’s size chart, you’re eliminating up to 75% of the remaining choices off the wall. If you are near the cut line for a fin size, aggressive surfers who drive hard through turns can size up, where surfers who don’t push as hard through the turns will probably like the smaller of the two sizes. Also, when on the cut line, know that narrower-tailed boards like smaller fins since they are typically surfed at higher speeds, where super-wide-tailed boards like bigger fins to offset the added tail area.

3. What Types Of Waves Will You Be Surfing The Board In?

Just like different board designs for different wave types, there are different fin designs for different wave types. Generally, fins with a more vertical leading edge turn in a tighter arc and are better for fitting more turns into a tighter space. For these fins, think dumpy, closeout beachbreaks where you only have a limited space to get the job done. These fins can also be helpful in racey, fast-breaking waves where it’s important to get on rail fast and get the ball rolling. More rake in the fin makes it better for drawn-out turns. How does that feel? They will feel solid and confident drawing out a high-speed, long-radius turn, where the more vertical fin will feel nervous and skittish, like it wants to initiate the turn sooner.

4. Do You Consider Yourself An Aggressive Surfer Or A Free-Flowing Surfer?

This question helps when looking at fin construction. Surfers who are really pushing hard through their turns or surfing in faster, more powerful waves, will appreciate the added stiffness that carbon or solid fiberglass adds to their fins, whereas surfers who are just flowing through their turns may find these constructions to be too stiff. How does “too stiff” feel? Basically, you’re not able to flex the fin, and then receive the bonus of that flex, which is a burst of speed out of the turn. A fin that feels too stiff feels like it’s not flexing at all. Conversely, a fin that’s too soft, like plastic fins for most surfers, flexes and washes out, never really springing back effectively. If you have tried a set of carbon-reinforced fins and feel they’re a bit too stiff, try a set of the same template, but with fiberglass/honeycomb construction.

This is a fin performance measuring system that Futures uses to make the tech easier to understand. The larger the number, the more speed the fin generates. Ride Numbers 7-10 are good for when the surf is soft, gutless, and has no push. The smaller the Ride Number, the better the fin is for control and confidence in fast-breaking waves. When it’s pumping, heavy, and fast, Ride Numbers 1-4 offer the most control and confidence. The mid-range numbers 4-7 are great as an all-around fin or a “tweener” for your fin quiver. Everything described above in this article still applies (size, construction, rake, etc).

Once you’ve applied these five criteria to finding the right fin, you should be down to 1-2 choices. That’s pretty good, considering we started out with over 100. Maybe the color of one of those two fins will even match your board. But don’t you dare choose the matching color before you hone in your choices. Otherwise, you’re missing the boat. 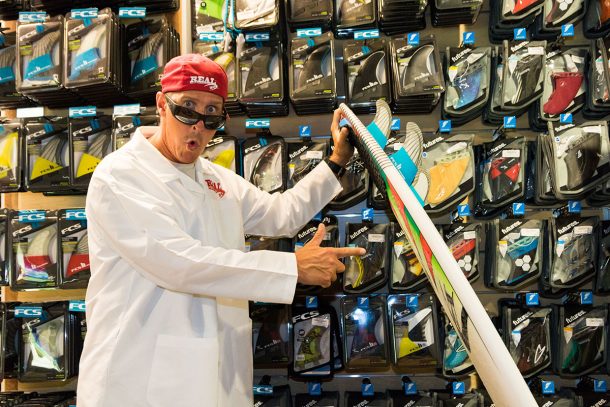 Four Fin Quotes To Live By:

-When you’re up and planing on the wave, your fins are nearly 50% of your wetted surface area. Why do people care so much about their surfboards and so little about their fins?

-If you’re having a hard time understanding the benefits of high-performance fins, think of riding a snowboard or pair of skis made of plastic. When you load up a turn, instead of springing you out into the next turn, they would just keep bending and bending, and never really rebound you out of the turn. That’s what plastic fins feel like compared to high-performance fins. You’re losing that extra burst of speed out of every turn.

-Don’t be lazy! Try different fins and different fin setups in your board. I had a board that I swore would be killer as a quad, and it was actually really average. When I switched it to a thruster, it was one of the best boards of that style I’ve ever tried.

-The “new” mid-length single fin boards are even more dependent on nailing the perfect fin to get the most out of the board. If anything, people tend to over-fin these boards and kill the performance with too much fin. How does this feel? You’ll bog down in your bottom turn and get passed by the section. You’ll also be riding a board that feels edgy, critical, and retro. When you size it down correctly, you’ll likely have that Aha! moment, and then the board will be neutral, free, and fast through the water.

Article as seen in Surfer Magazine.