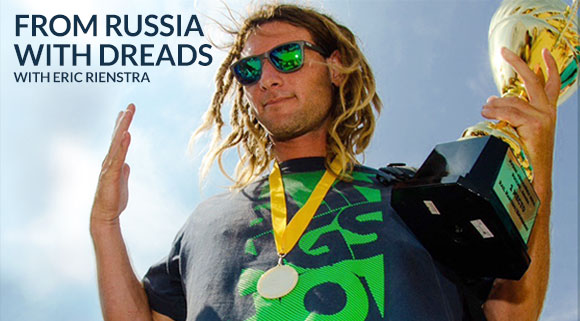 by Trip Forman and Eric Rienstra

T: How’s it going Eric?
E: Hey guys things are going great! Brandon [Scheid] just got here [to Brazil] so we are ready to rock!

Let’s talk about the Rail Masters event in Russia, where you just took 1st place! The wind looked pretty light over there. In all the photos we never saw whitecaps. Is this the normal breeze or was it a “lighter week”?
It was definitely a light week. We only had just enough wind to get through the heats and one short free session. Most of the days we were stuck on the beach drooling all over the sliders.

What gear did you ride to keep moving and win the comp?
I was on the 17m Slingshot Turbine the whole time except for one heat in the freestyle where I was on a 13m Fuel.

Most of us think of Russia as a snowy place where Sylvester Stalone went to train for Rocky IV. Tell us about the climate and what you were wearing on land and in the water.
It was hot, like crank the AC all day hot. The Northern Black Sea reminded me of Baja Mexico with a mountainous desert climate, so once the pressure dropped it could get a bit cold. But I was still in boardshorts and a t-shirt all day in the water and at night.

What sort of travel logistics did you have to jump thru to travel there?
Not too many actually. The hardest part is getting the travel visa since you have to submit an invite letter, notorized by a Russian travel agency, confirming your lodging and stay duration, but that was mostly taken care of by the event managers. The visa is also relatively expensive since it is only valid for 30 days (a Brazilian Visa is the same price and you get 180 days/year for 10 years). Immigration and customs was a breeze after that. The rental cars in Anapa were sold out, but luckily the event had us covered there too. 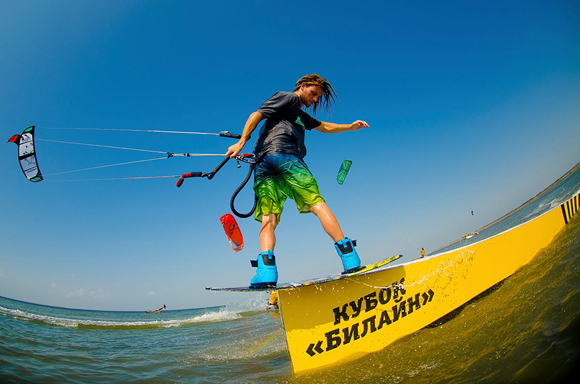 How’s the Russian party scene? Night clubs? Music? …And yes…the Girls?
Well as usual I was in some middle-of-nowhere kite spot with very few signs of civilization. But its was the beach so there was a trace of a tourism based industry with a Main Street of shops and restaurants but not much night life. Luckily for us the Rail Masters was part of the Bee Camp Music Festival so the place was packed (thus the lack of rental cars). The festival stage was set up at the event site with people camping all the way down the beach. The music was great, American radio hits and hip hop from the past few decades. Ironic that not many of the Russians could understand the lyrics, but they more than made up for it with their dancing skills. Apparently dance classes are a regular thing for Russian girls.

Tell us about the food. What were your three favorite dishes?
Whenever you ask me about food you know I’m comparing everything to Waves Market’s burritos. The closest thing I found was the Shwarma, which I ate everyday. Other than that the food was typical rice and meat plates. Breakfast at the hotel consisted of some awesome pancakes with some fruit and yogurt.

How do you top winning a slider event in Russia?
Aside from kiteboarding on the moon, all I can think of is coming home to win the only other major slider event in the world, Triple-S!

Where are you off to next?
I’m in Brazil now but after that we’ll see where the wind takes me.