After missing out on the inaugural Hood River Slider Jam last year, I was sure to mark my calendar and get to it this year.  Building upon it’s grassroots foundation, Colleen Carroll, Brandon Scheid, Craig Cunningham, and Rich Sabo worked tirelessly to bring in sponsorship, judges, and new features for this year, and they did not disappoint!  Starting with a successful crowd funding for a $10,000 kicker and a deal with Cabrinha for a new funbox, they then secured ample sponsorship to provide goodie bags for the riders and prize money as well as lining up Alex Lewis-Hughes and Ian Daly to judge.  The event kicked off with a great opening party put on by Stoked Roasters followed by a media free ride day.  Then we had a build/setup day to put the new funbox in the water and build a corrugated extension for one of the incline boxes.  Then it was on! 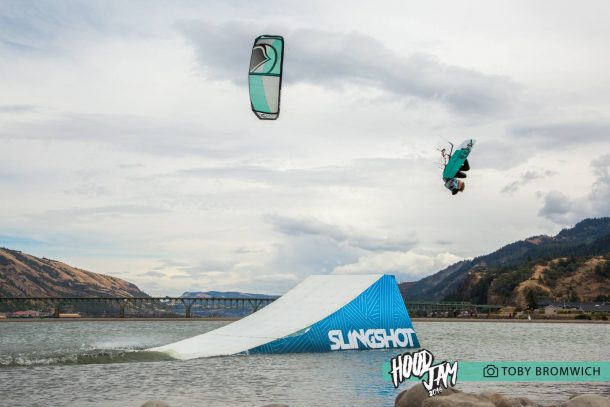 We had pretty good wind through the whole preliminaries and were able to get through all but one feature in one day.  Then the next day it was a bit up and down but we still pushed through and finished up the prelims and went on to start the final.  The top 3 riders in each mens heat advanced to the final.  The only upset of the prelims was in heat 1 were 4th seed Rich Sabo outscored 3rd seed James Boulding by more than 2 points, advancing him to the final against  Ewan Jaspan, Noe Font, Brandon Scheid, Sam Light, Craig Cunningham, Christophe Tack, Sam Medysky, and myself. 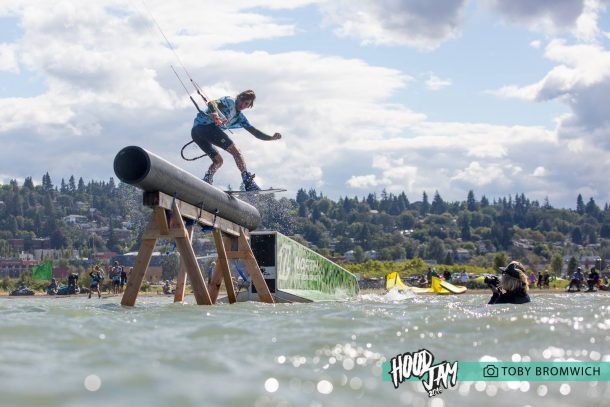 Noe Font throwing down on the North Slider to tube combo

In the final the wind got a bit crazy and it seemed like everyone was struggling.  After only two features the event was called off for the day, leaving the standings super close with Craig in 1st place by only 1.1 over Brandon in 6th!   But it didn’t stay that way for long…  On the final slider Scheid and Light outscored the whole field by more than 2 points and would continue to post scores near the top on both kickers, leading them to the top two positions in the end.  Ewan held onto 3rd Overall with a great performance taking 2nd in Kicker and 4th in Sliders while Noe and I battled out for 4th Overall with Noe taking it by 0.3 in the end.  Craig ended 3rd in Sliders but had some trouble on the kickers, posting just a 3.1 on the starboard side, dropping him to 6th Overall.  But the biggest bummer was Christophe Tack getting an ear infection and not being able to compete in the final at all… 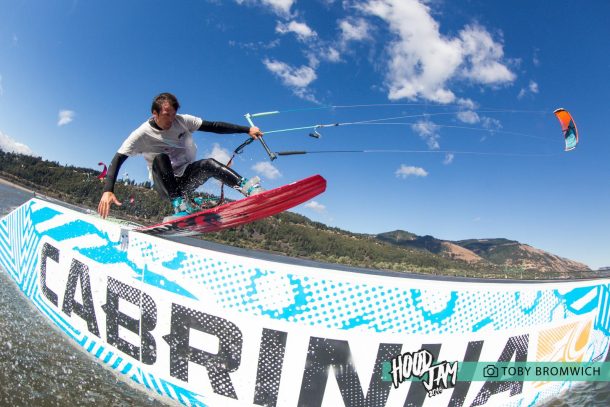 Rich Sabo presses one out on the funbox

On the last day of the event we ran the King of the Kicker contest sponsored by ION.  Luckily Tack was able to get a hold of some medicine and had recovered enough to take part!  Unfortunately it was my turn to sit out as I had tweaked my back during the final so I volunteered to help judge.  Everyone was throwing down massive and a few first time tricks were landed!  It started with Brandon, Christophe, and Sam Light all stomping Moby Dick 5’s like they were nothing, with Tack even adding a grab!  Light then stepped the game up landing a Heelside Frontside 900 but was a little sloppy on the landing and ended up tweaking his ankle.  Then Brandon came along with the first ever Blind Pete 5 and followed it up with a grabbed one!  I couldn’t believe it and thought for sure I wouldn’t see anything that could top it.  But then Tack busted out a perfect Heelside Front 9, which didn’t surprise me at all until I realized that it was on the opposite tack than he had done during the Wind Voyager Triple S, so he has done them both ways!!!   For sure he is the only kiter in the world to ever do switch and regular 900’s.  So there I was, trying to decide between two major milestones in not just kite park history but kiteboarding history as a whole… an impossible decision.  In the end the only logical answer was a tie. 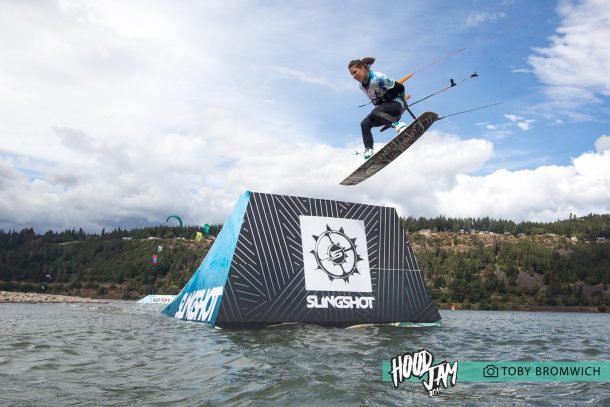 On the women’s side we were all surprised to see Annelous Lammerts win the final while only posting the highest score on 2/5 features.  It is a testament to how competitive the girls side of park riding has gotten.  Colleen Carroll also posted the highest score on 2/5 features but fell short by less than half a point to take 2nd Overall.  And the highest score on the final feature, as well as the highest women trick score of a 7.5 went to Lindsay McClure off the port kicker, securing 3rd place Overall.  In the Queen of the Kicker it was between Colleen and Sensi Graves as they went trick for trick throughout.  In the end Colleen was able to stomp a Crowmobe to beat Sensi’s Heelside Frontside 5. 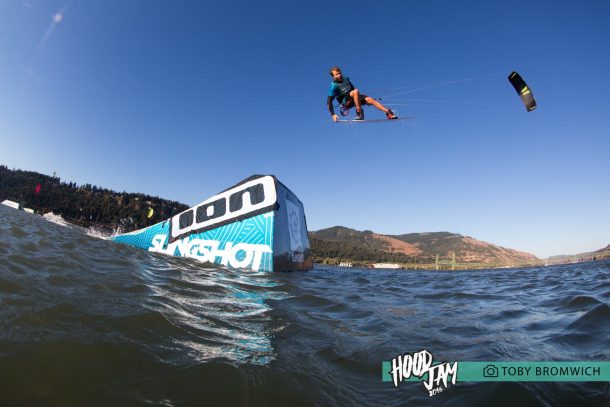 Sam Light styling out a tail grab
The awards party was once again held at Stoked Roasters with beer kegs provided by Full Sail Brewery.  I can’t remember anything else that happened that night…  See ya next year! 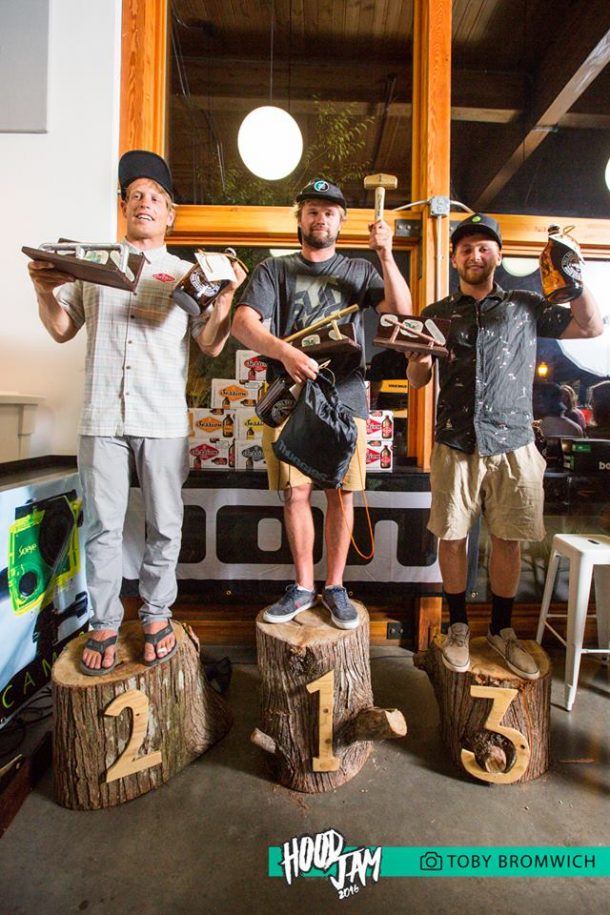 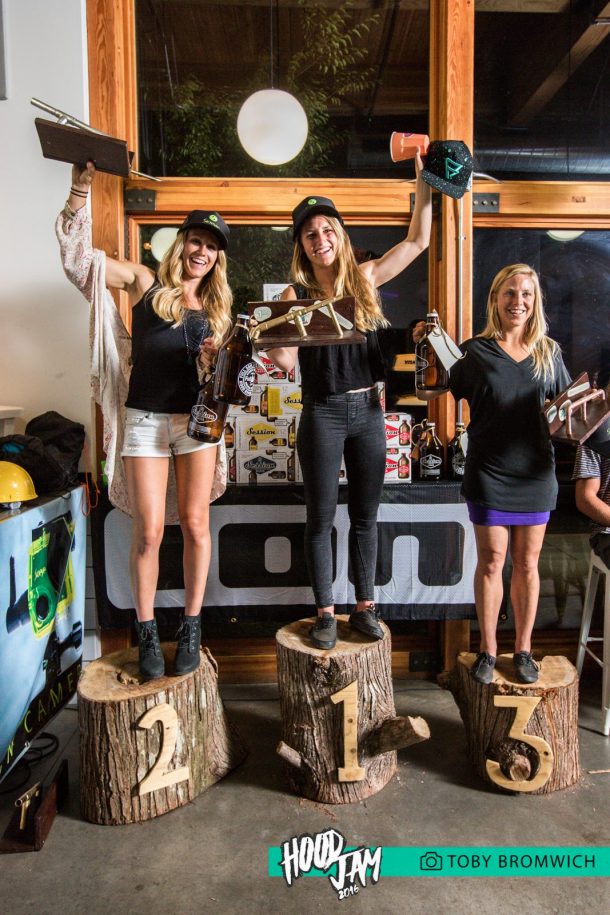