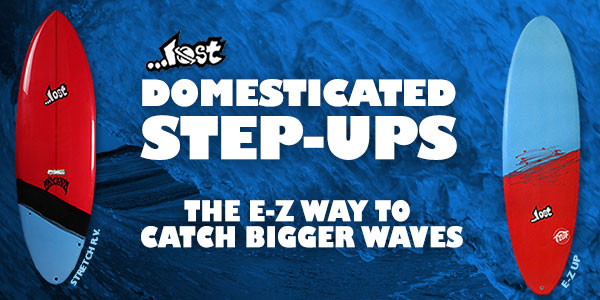 Let’s paint a picture…Your favorite board ever is the …Lost RV or LayZboy. This type of board has been a “game changer” for you, transforming a life of looking for the perfect board, into session after session of gorging yourself with wave count, improving performance and big smiles.

Once you’ve made one of these boards your “daily driver”, the next step is to define its limits and recognize when it has reached them. When it comes to bigger or rounder surf (more hollow), you will notice the RV and LayZboy hitting a wall in performance, or not even being able to get into the wave due to the waves larger size or too much water moving around. This is when you need a “step-up” board.

Up until late last year, this meant leaving that “miracle board” and going back to a board with a pointy nose as your step-up. You remember, the ones that don’t work as well for you, sometimes leaves you frustrated, and never put a grin as wide on your face as the RV and LayZboy do. Not only does the board not work as well for you, it also leaves you not feeling confident in the lineup, which isn’t the best feeling in overhead surf. As popular as the RV and the LayZboy have become, it only made sense for …Lost to develop a series of step-up boards to compliment their performance with a similar feeling in larger or rounder surf. Introducing the …Lost Stretch RV and E-Z Up.

We first started surfing the …Lost E-Z Up or “LayZboy Step-Up”,last Summer. We were able to surf this model through all of hurricane swell season here in Cape Hatteras, as well as traveling to Nicaragua later in the Fall. You can read more about those experiences and feedback HERE. When you hear “E-Z Up” and “LayZboy Step-Up”, it’s the same board. E-Z Up is the official model name that …Lost gave to this new design when they released their 2015 lineup. This was the first of the two domesticated step-ups, and compared to the standard LayZboy, the E-Z Up has a “stretched” outline with slightly more nose and tail rocker, thinner rails and an area-reduced round tail.

All of these design changes allow the board to handle higher speeds and fit into rounder waves, all with a very confidence inspiring feeling similar to the original LayZboy. The surprise nobody saw coming was how well this board works in very average surf, something that a normal step-up normally plows in. If you own a LayZboy or similar and are looking for a board that works incredibly well and still gives a similar feel in better surf, the E-Z Up is the board you should be checking out, as it will deliver that same game changing performance as your LayZboy, but in a package suitable for better waves.

After the successful release of the E-Z Up, aka LayZboy Step-Up, …Lost went to work on designing a big wave brother for their RV. This board needed to have a similar RV look with a more neutral feel in bigger surf. Why does …Lost have both the Stretch RV and the E-Z Up in the lineup? Just as the LayZboy and RV are slightly different designs, so are the E-Z Up and Stretch RV. The Stretch RV has a wider width, more outline curve and a double wing roundtail (much like the …Lost V3 Round It). These same differences are consistent when comparing the RV to the LayZboy, giving the board a more loose feel all around with a more pivotal feel in the turns. The LayZboy and E-Z Up are more tuned for longer drawn out turns, both having slightly wider ranges of wave size use due to a smooth outline curve.

Neither the Stretch RV or E-Z Up is “better”, it just depends on which one fits your surfing style and quiver needs. The Stretch RV fits the better wave bill perfectly above the standard RV, with slightly more rocker at the ends, thinner rails and an area reduced double wing round tail. This keeps the board neutral and controllable at higher speeds and also helps it fit into rounder waves where the standard RV would start to feel flat and sticky. Just like the E-Z Up, the Stretch RV can perform on sub par “step-up” days and will end up being just as cherished in your quiver as the standard RV.

Insider Info:
Here is some info gathered along the way of riding these boards over the past 9 months. The standard RV and LayZboy love the driving feel of the Futures Seaworthy Controllers to help create speed in conditions that are soft and slow. The Stretch RV and E-Z Up are designed for faster moving waves and with their narrower tails, do not like the added lift of these fins. When you first put them on the board, they start out by straight up not looking right, which is a bad sign to begin with. When you try surfing with them, they generate too much lift and speed. After ditching those, we tried a variety of standard looking quad fin and tri fin set-ups like the Futures MB2 5-fin set. Where most people like the RV and LayZboy set up as a quad, these narrower tailed boards liked the thruster and quad equally as much, so don’t rule out setting up your Domesticated Step-Up as a thruster.

When you’re sizing your Stretch RV or E-Z Up, if you go with the same size (in liters) as your RV or LayZboy, the board will paddle very close to the same as the standard shapes, but will fit much better into rounder waves, plus handle high speed turns better with the thinner rails. If you go one size larger (in liters) compared to your standard RV or LayZboy, the board will then paddle faster and be able to catch larger waves. This same board will also feel comfortable in round waves, even at the larger (liters) size. So really it depends on what you’re looking for: If you experience mostly the same size surf, just mushy or hollow, then go for the same size in liters (which will translate into a longer length in both models). If you want to move out to the next sandbar or reef and start tracking down larger waves, then bump up in volume to gain some paddle power.

A few months ago we talked about the …Lost V3 Rocket, being the “sleeker soulmate” of the RV and LayZboy. This still holds true for the description of the V3 Rocket. The V3 is a great board for getting loose in every day waves or even waves a touch bigger than the RV or LayZboy. The V3 has a very lively feel, much like a performance shortboard, but is accessible to those that ride RVs and LayZboys on a daily basis. These new Domesticated Step-Ups like the E-Z Up and Stretch RV are different than the V3 in that they provide more range into bigger waves, with a blood type matched similarly to the RV and LayZBoy. This makes them feel very confident in larger surf, which is exactly what you are looking for in those conditions. They also provide a seamless transition back and forth to their smaller wave relatives.