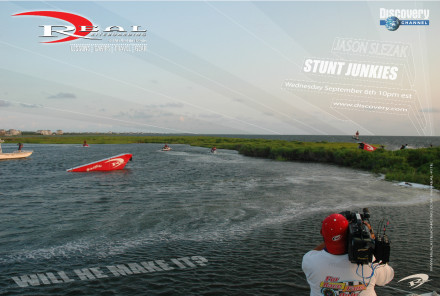 The Discovery Channel was recently spotted filming at REAL Kiteboarding in Cape Hatteras, North Carolina. They were here July 17-21st filming an episode of Stunt Junkies, featuring the sport of kiteboarding and REAL team member Jason Slezak. For those of you that are not familiar with the show, Discovery basically writes a blank check to let the top athletes in the world attempt their wildest dream stunts!

Slezak’s stunt involved clearing the largest ramp to ramp, gap jump, over land, ever attempted on a kiteboard. One large takeoff ramp was set up outside The Slick Island and a narrower landing ramp was then placed inside The Slick Island over 140 ft away! The Stunt Junkies film crew, over 40 people deep, equipped with 2 boats, 3 jetskis, a helicopter and 15 different camera angles caught the stunt attempt on film and will air the show (and outcome!) on the Discovery Channel, Friday September 15th @ 7pm and 11pm.

To find out more about the exciting Stunt Junkies series and confirm the local airtimes in your area, check www.discovery.com/stuntjunkies