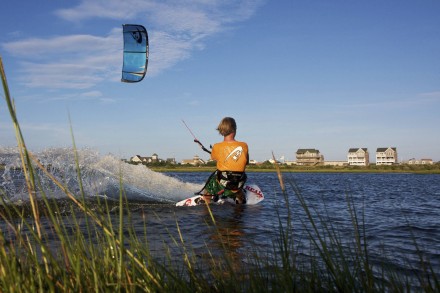 In Cape Hatteras, North Carolina we get to kite 20 or more days a month, 12 months a year. The wind stats below, taken directly from IKitesurf.com, show this and even more.

Number of days per month with “kiteable” winds over 16mph for 2009:

You’ll see several interesting trends in this data. The first is that it is windy year round. We live here and get to ride 20 or more days every month. There is no exception to this rule since 1998, when kiteboarding first started here.

The next is that the number of rideable days seems pretty even year round. The lowest is December at 20 days and the highest is July at 29 days.

This brings us to our third topic of discussion, that being July being the windiest month of the year. This comes as a huge surprise to a lot of kiteboarders, but not to us that work at REAL and live here year round. July (and June and August for that matter) have produced epic conditions with wind almost every day. While Spring and Fall have a huge reputation for stronger winds and numbers of days on the water, Summer winds are generally more consistent on a days per month basis. The reason the Spring/Fall reputation gained so much steam was from the windsurfing era when home rentals were less money to rent during the Spring and Fall “off tourist seasons”. The Summer season never had a chance to strut its stuff to windsurfers and therefore show how windy and consistent it was.

Not displayed in these numbers are the high wind speeds we see here in Cape Hatteras. While “average” days are in the 20’s and 30’s mph, we often get 40+mph requiring kites in the 5m and 7m range to effectively ride. Riding in the Winter months, the wind has even more power and punch. If you are riding all Winter, you’ll definitely need a 6m and 8m (or 5m and 7m) to not get made a fool of by mother nature…..

Year round, Cape Hatteras sees winds from around the clock as far as direction is concerned. This is OK since Cape Hatteras is 35 miles away from the mainland and any wind obstructions, making any wind direction a clean and steady wind to kite in. Generally Spring sees a good mix of SW and NE winds with some NW and North winds. Summer sees the NE die out and the SW take all the glory, with a few S and SE showing up in August and September. Fall winds show the SW fading away, replaced by NW,N and NE. Winter sees a pretty even mix of every direction on the compass with northerly winds being cooler and southerly winds being warmer.