Battle of the Blimps : Four Kites that Rule the Pool 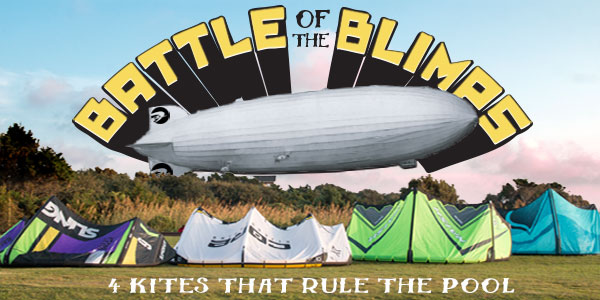 What makes an All Around Kite?

For a kite to be considered an All Around model it has to work well for both beginners and advanced riders.  These kites feature fast and easy relaunch, they are very stable in the sky, and they handle gusty conditions with ease.  You can learn on these kites and progress into freestyle and the waves.

What are the four best kites on the market?

The Liquid Force NV, Naish Pivot, Core XR4, and Slingshot Rally are the highest rated kites amongst the REAL Team, and for good reasons. These four kites are the best all arounders on the market, and anyone can grab one of these kites and expect to have a great time. If you are looking to progress your wake style riding, get on the Liquid Force NV and make that handle pass.  If you dream of getting barreled and slashing waves, you will love the Naish Pivot.  Is your greatest joy flying with the birds and floating through the sky at new heights?  Go with the Core Riot XR4!  As a big rider, kiting can be frustrating because kites react differently under heavier stress.  A reliable kite that will keep its shape and maximize the fun on your session, check out the Slingshot Rally.  Regardless of which kite you pick you will be able to take sessions and progress. Think about what kind of riding inspires you and use this article as a guide to pick your kite accordingly.

Before we purchase any kites for the shop and Lesson Center, we put the new gear into the hands of our coaches and staff to be tested.  We quickly discover any issues by testing new gear with total beginners and taking sessions on it after work. It is impossible to replicate the crashes and wipe outs that a beginner goes through, and kites do some crazy things in a beginner’s hands. For the post teaching sessions, the REAL Team will hit the Slick or the surf and test the boosting, park skills, and lip hitting capabilities.  We learn a lot about a kite by getting it in the hands of our students and coaches right away.  If a kite doesn’t work, our coaches won’t use it, and we won’t sell it.

The Liquid Force NV is the Wakestyle King!  Designed in the gusty conditions of the Columbia River Gorge, this kite handles gusts exceptionally well and feels like a consistent ball of power as it flies through the window.  Whether it is parked, turning, or looping, the 2017 NV offers a very consistent pull regardless of where it is in the wind window.  Where the NV really excels is unhooked wakestyle riding.  When you unhook there is no surge of power and the kite is very easy to control.  When you go to set an edge for a load and pop trick the lines load up with tension and will give you a consistent and reliable release from the water.  If you are interested in unhooked tricks, and wakestyle riding, the Liquid Force NV is without a doubt the all around kite for you.

Naish has a long history in the waves. The Pivot was designed and tested on the powerful breaks of Maui, Hawaii.  What sets the Pivot apart from the others, and puts it into a league of its own is the kite’s performance in the surf.  As the name would suggest, the Naish Pivot makes a very pivotal turn. It turns off of the kites center axis, this makes the pivot very easy to position wherever you want in the window. This enables you to set up for a wave or get away from a closeout with ease. There are other kites with a pivotal turn on the market but what sets Naish above the rest is how consistently it pulls during the pivot. There is no loss of power during the turn. This makes you maintain more line tension and ride into waves with speed and confidence.  If you are looking for a great all arounder that will take you all the way to the professional level in the surf you should get on the Naish Pivot.

Click here for more info, and a full REAL Review of the 2017 Naish Pivot

CORE XR4: BOOST TO THE MOON

The Core Riot XR4 is a kite that has helped us reach new heights in The Slick!  When you pull the trigger on a boost, this is the kite that will take you straight to the moon, let you hangout in the stratosphere for a while, and bring you back to earth gently. The XR4 is a five strut design that handles over-powered conditions very well.  The use of their proprietary Exo-Tex dacron for the leading edge and struts gives the XR4 an ultra rigid frame that is not prone to warping under load what so ever. If you are looking for a premium kite that covers a huge wind range and will take your boosts to new heights, don’t hesitate to pull the trigger on the XR4.

The Rally utilizes Slingshot’s legendary construction, in a five strut design to make a kite that keeps it’s shape very well regardless of the conditions.  The Rally offers the most consistent pull out of these four kites, and when I say consistent, I really mean constant.  This kite pulls like a mac truck regardless of where it is in the window.  When you start going on the Rally you just keep going and going and going.  This makes the Rally one of the best kites ever for heavier riders.  If you are sick of bogging down and feel like you just don’t have enough pull from your kite, then you should get a Rally on the end of your lines. The Rally will cut your frustration, and get you more time on the water, with less time splashing around wishing you had more power.