A Day in the Life of REAL Kite Camp 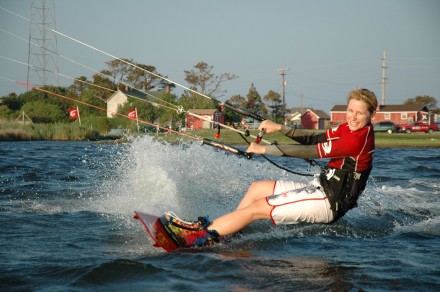 When you wake up and it is blowing SW 20 on Cape Hatteras, you know you are in for a good day. All day you are going to be hearing about sessions being taken. This past Wednesday was no different. 85 degree SW 21 gusting to 22 was the reading on the Frisco Pier Meter. I think that Lucie was the first on the water that day with the 9am Salvo Day Use to REAL downwinder through the Slick. The sessions continued from there.

I was working in the Buxton shop for the day until about 6pm. Actually, it was exactly 6pm and one second when I ran out the door of the Buxton Kite Center to go hit the Southside session. I tracked the sessions throughout the day, and this is what I heard.

8:36am – Lucie was running out the door with breakfast in hand to take a Slick run before she had to be at work. She met up with Pam, and they rode 7m Slingshot Fuels powered up through the Slick.

8:57am – The iKitesurf.com live wind meters were all reading above 20 out of the SW for Cape Hatteras. The ocean side at the Frisco Pier was the classic steady summer breeze of SW 21 gusting to 22. The Slick was already turned on at 24 to 27 SW. I knew it was going to be a good day.

9:23am – Head Coach Colin Gowland called in the coaching report from the Waves Lesson Center. Stone, Stan, and Mitch were heading out back with six Zero2Hero campers to get them confident with flying a kite in the water when it was windy. The Head Coach’s kite call for the day was 5m and 7m 2-line Best Grunts and big Litewave 179, 169 and 145 boards for the students that had not been on the water too many times. The advanced lessons geared up with Slingshot, Best and Liquid Force 7, 8, and 9m kites and Jimmy Lewis 139, 133, and 125 boards depending on the student’s size. Colin, Neil, and Ed were heading out with Watertimes and Double Downs, while Llew, Sammy, and Slezy were taking some Slick time with the intermediate and advanced lessons.

9:55am – Zack and Joe stop in at the Buxton Kite Center to check the wind and to rub it in that they have the day off. The call is to hit the Southside ocean side downwinder from the Ferry Docks in Hatteras to the Frisco Pier. They arm themselves with the demo Jimmy Lewis Rad-F 137 and 132, and they proceed directly to the Ferry Docks.

11:59am – Tommie, Nick, Chad, Judith, and Chris head out of the Buxton Kite Center to spend their lunch time getting some at Kite Point.

12:03pm – Lucie arrives to work with wet hair, sandy toes, and a big smile. “I was so litt in the Slick.” She tells me. “I had the Slick all to myself until Llew and his Boost lesson King To came in. It was pretty cool though because King was boosting huge airs on the Fuel 7. I think that he only gets to ride big kites at home, so it was nice to see.”

1:51pm – Colin checks in from the Waves Lesson Center with the afternoon coaching report. Huge progress was made across the board in the Zero to Hero and the 10am Lessons. A lot of break-through first long rides and rides in both directions were reported. Slezy, Sammy, and Aimee were setting up to go shoot with REAL Media mogul, Justin Davis, in the Slick. Aimee at a whopping 105lbs was taking out the 2 line 3m Best Grunt. Colin was going to assist in getting the afternoon lessons off and then go take some speed runs on M2’s Jimmy Lewis Myth in the flat water.

3:17pm – Hitting the refresh button for about the 300th time since 9am shows me the northern part of Hatteras Island is cranked up to about 30 SW and the Southside is steady in the mid 20s.

4:18pm – A big crew of big people come to the Buxton Kite Center to check the breeze on the iKitesurf.com monitor. The big boys and tall girls consisted of Toeside Tom, Tree, Cory, Nadia (Who is tall. Not big.), Kevin and DeeDee rolled up with stories of being really powered up in the flat water and taking down some powerful chest to head high buckets in the Southside ocean. 20 minutes later, the totally stoked big and tall crew takes off for another Oceanside downwinder with a pile of demo Slingshot Diesels to try out for the wave session.

4:38pm – Zack reports in that the morning Southside sessions would be one to remember, and that he was going to try to break the sound barrier by getting super litt up on his 9m in the Planet of the Apes and the Slick. Nice 8 miles on a 9m to back up the wave session. I knew that Z would be drinking a lot of coffee on Thursday morning to try and kill the kite hang over.

5:04pm – Colin reports in that the campers were stoked and spent from a full day of SW. A lot of the coaches were heading up to the Planet of the Apes launch while Llew, Sammy, Slezy and Kristy were spotted driving South on Hwy. 12 for the evening Southside wave session.

6:00pm – There was a mass exodus from Buxton Kite Center, and anyone that was in the shop at the time scattered to go get the last session of the day.

The stories of the solid steady breeze and the meaty waves were true. The Southside session was mental, and a huge crew of kiteboarders were parading downwind in the ocean until the sun went down. My guess was that everyone at REAL melted into bed with sun burned noses, tired muscles, and big smiles.