The Wind Voyager Triple-S Invitational took place June 3rd-9th, 2017 in Cape Hatteras, North Carolina, in the REAL Slick. 30 riders from 15 different countries traveled to The Wind Voyager Triple-S Invitational to test their skills on the KOA Resorts Kicker, Core Super Kicker, North A-Frame, Liquid Force Reverse Rainbow and the John Wayne 82ft Mega Rail. The Man and Woman to claim first place have their names etched on the Perpetual Trophy and have earned their place in kiteboarding history. With $50,000 on the line, the stakes were high and riders were eager to show off their skills. During the course of the week, Cape Hatteras received optimal conditions both on and off the water, with musical acts including Ky-Mani Marley, Mix Master Mike, DJ Qbert, Method Man & Redman bringing the energy into each night. 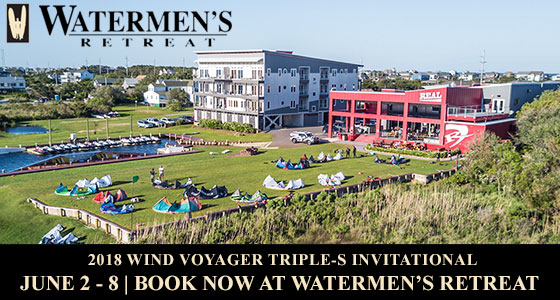