The Rusty Chew Toy is a new hybrid design for small to medium surf. This board excels both in user friendly and performance characteristics.

"Derived from our long time favorite "Piranha", The Chew Toy features a few modern tweaks to improve the performance and versatility."

The Rusty Chew Toy is a new hybrid design for small to medium surf. This board excels both in user friendly and performance characteristics.

"Derived from our long time favorite "Piranha", The Chew Toy features a few modern tweaks to improve the performance and versatility."

Rusty’s best selling hybrid design, the Piranha, needed an update and that’s why the new Chew Toy was introduced. The Chew Toy is targeted at small to medium size surf with an easy to perform design package. The Chew Toy has a generous width nose leading into a straighter mid section and curvy tail. This keeps overall width fairly modest when compared to most small wave hybrids. All Chew Toys come standard with stringerless EPS/Epoxy construction and carbon bottom and tail reinforcements. Rusty himself believes strongly in this construction adding to the performance of this board model, so he wanted it to be standard rather than just custom order only.

The Rusty Chew Toy has a light, performance feel to it. A lot of the time, the boards we test are standard PU/Poly, so having a lighter, stringerless EPS/Epoxy board got us all fired up for the added performance. We got to ride this board in a bunch of different conditions knee high up to head high. The Chew Toy paddles and catches waves beyond its volume numbers. Don’t let this confuse you into getting a smaller one, just reap the rewards of added wave count. The lightweight construction is more durable than standard PU/Poly, plus the stringerless blank flexes in and out of the turns adding spring and speed to every wave. The grab rails work to your advantage in several different ways: 1. They give you a confident grip during duck dives. 2. They strengthen the rails by running the cloth through a series of turns. 3. They allow the shaper to “hide” volume on the deck while keeping rails thin for performance. 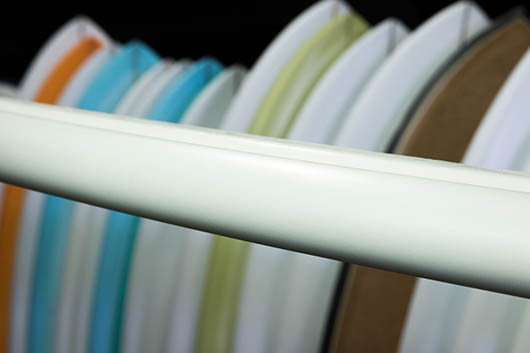 The outline and foil of the Chew Toy create a confident feel both paddling and surfing. The board slips through the water really easily. The added paddling and wave catching ability get you into the wave early. Once you’re up, the thinner rail engages quickly allowing you to harness the power up high on the wave. This added speed, plus the speed on tap from the flex of the stringerless blank, give you a lively, fast feel. One of the sessions had both a breaking away from you lefts (front side) and a bending toward you right (backside). The Chew Toy handled both well and really impressed us with the ability to come square off the top on the compressed rights backside. On the softer lefts, the ability to get into the wave early and start driving down the line from the get go, really helped build speed throughout the wave. The lightweight feel of the EPS/Epoxy construction livens up the turns, making the nose feel much smaller than it actually is when whipping it around.

Overall, the Chew Toy is a very accessible approach to hybrid high performance. The wave range on the Chew Toy starts at ankle to shin high for advanced surfers and goes up to head high plus. Intermediates and below will like surfing the Chew Toy in thigh high surf and above. Rusty calls it a “small wave board”, but this is on a global fantasy scale, not a real world scale. The Chew Toy will easily hold in up to solid head high mainland surf. The thinner rails really help with control and hold bigger surf. It’s not super wide or super flat, so there will be boards with better static glide in the super small stuff, both overall the Chew Toy works through a very wide range of every day conditions, making it a great go to hybrid shape.

The fins we used in our Chew Toy were FCS2 Mick Fanning's for the thruster set up, and then switching to FCS Performer PC Medium Quad Trailers for the quad set up. Just like the Piranha, the Chew Toy excels with both set ups, the thruster being better for more vertical lines, the quad a touch better for generating linear speed and also increasing hold on the steep, barreling days. We surfed the Chew Toy with the FCS T-3 Traction Pad. 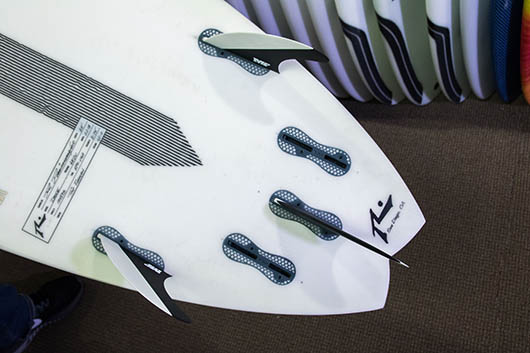 It’s cool that Rusty pushed higher tech with this model. There’s so much to gain in average surf conditions by going with a lighter, livelier construction. In conditions where you’re having to generate speed, having a lighter, flexier board is a huge advantage. Rusty’s EPS/Epoxy construction is proven, with lighter weights and added durability compared to PU/Poly.

Compared to the popular Rusty Smoothie, the Chew Toy has a bit more zing in small surf due to the wider tailblock, slightly wider nose and lighter/livelier construction that allows you to load up the turns. The Chew Toy can also be surfed with a more vertical/pivotal approach. The Smoothie excels with a slightly longer, drawn out turn and wave range slightly larger than the Chew Toys target. 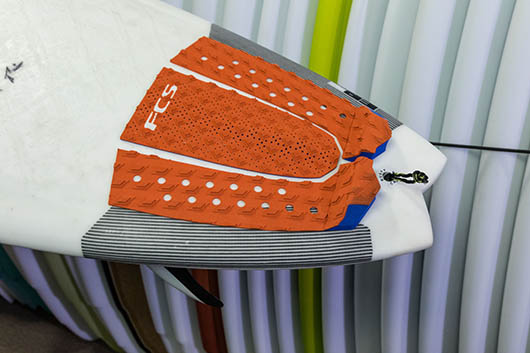 Why You Want a Rusty Chew Toy

You’re looking for a high performance hybrid design that excels in average surf. With its wide range of use, the Rusty Chew Toy is a great pick for your hybrid daily driver. 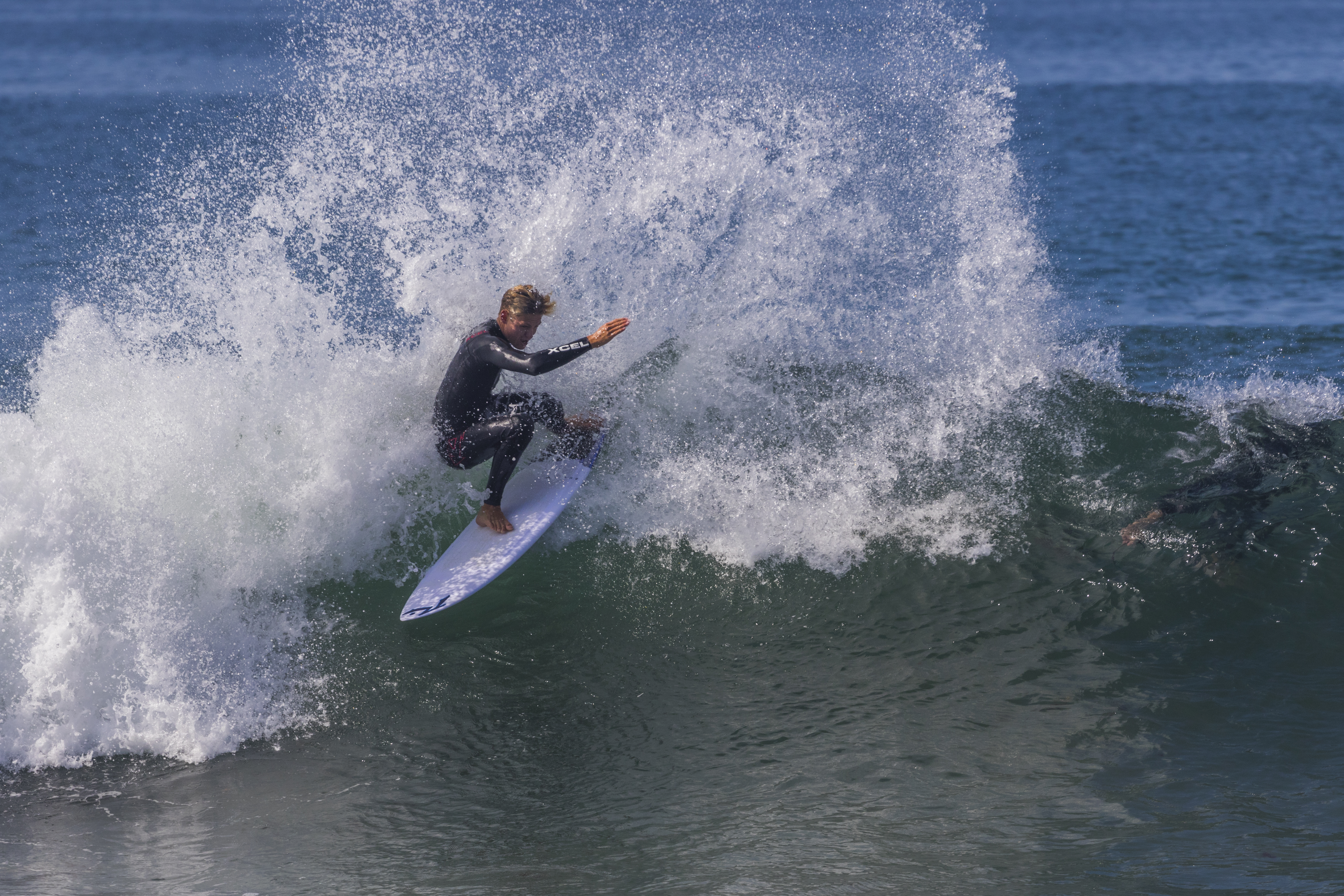 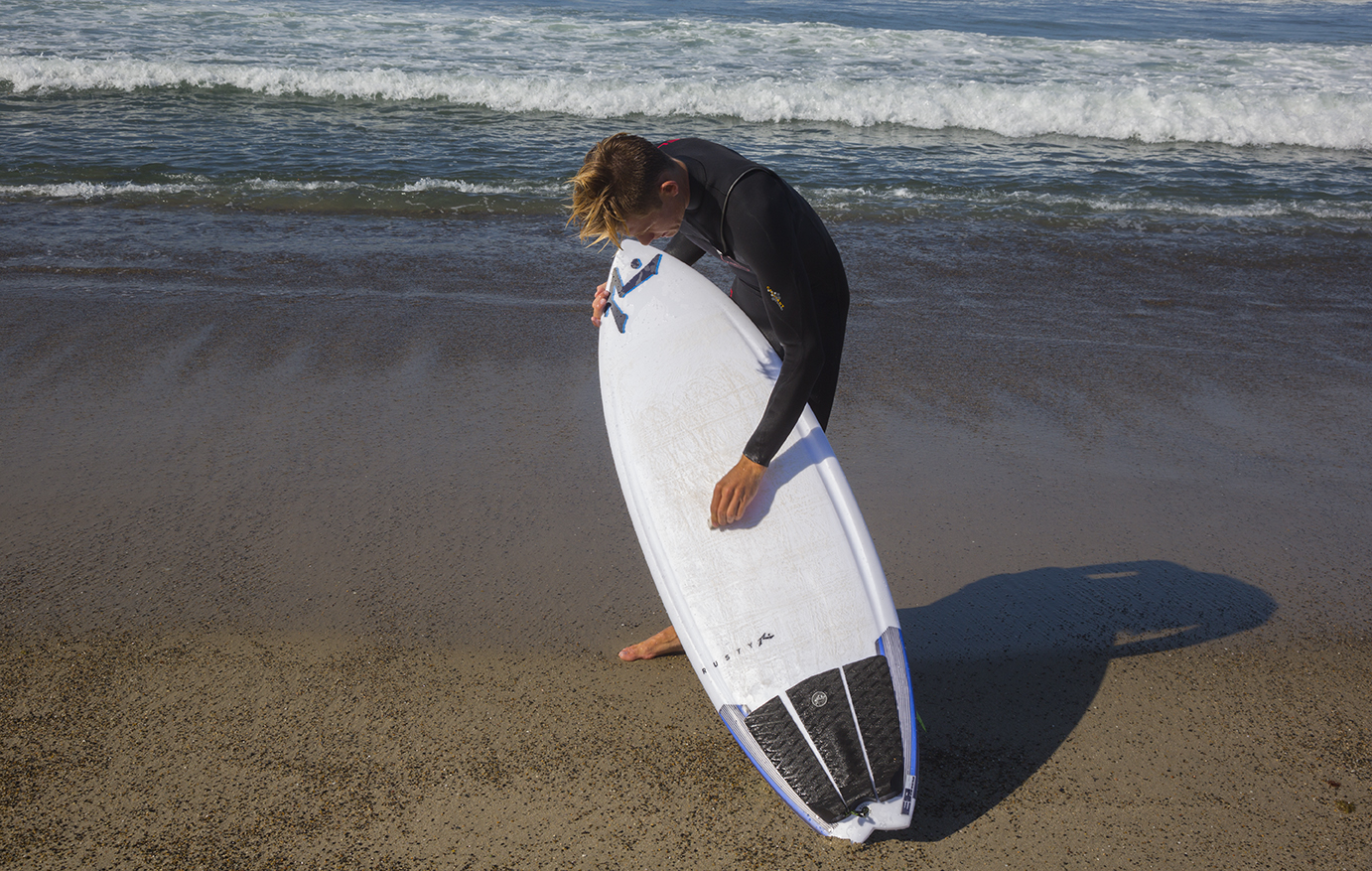 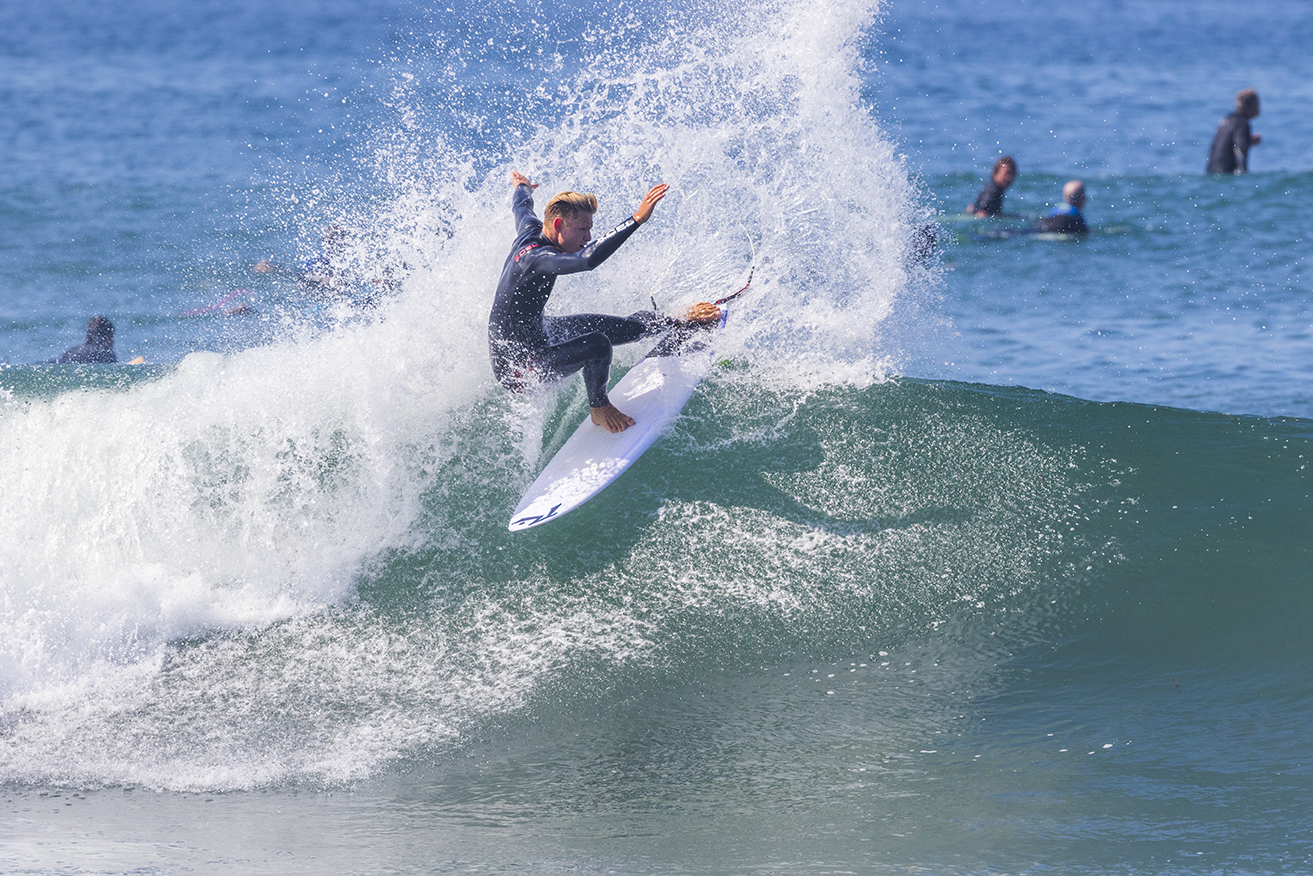 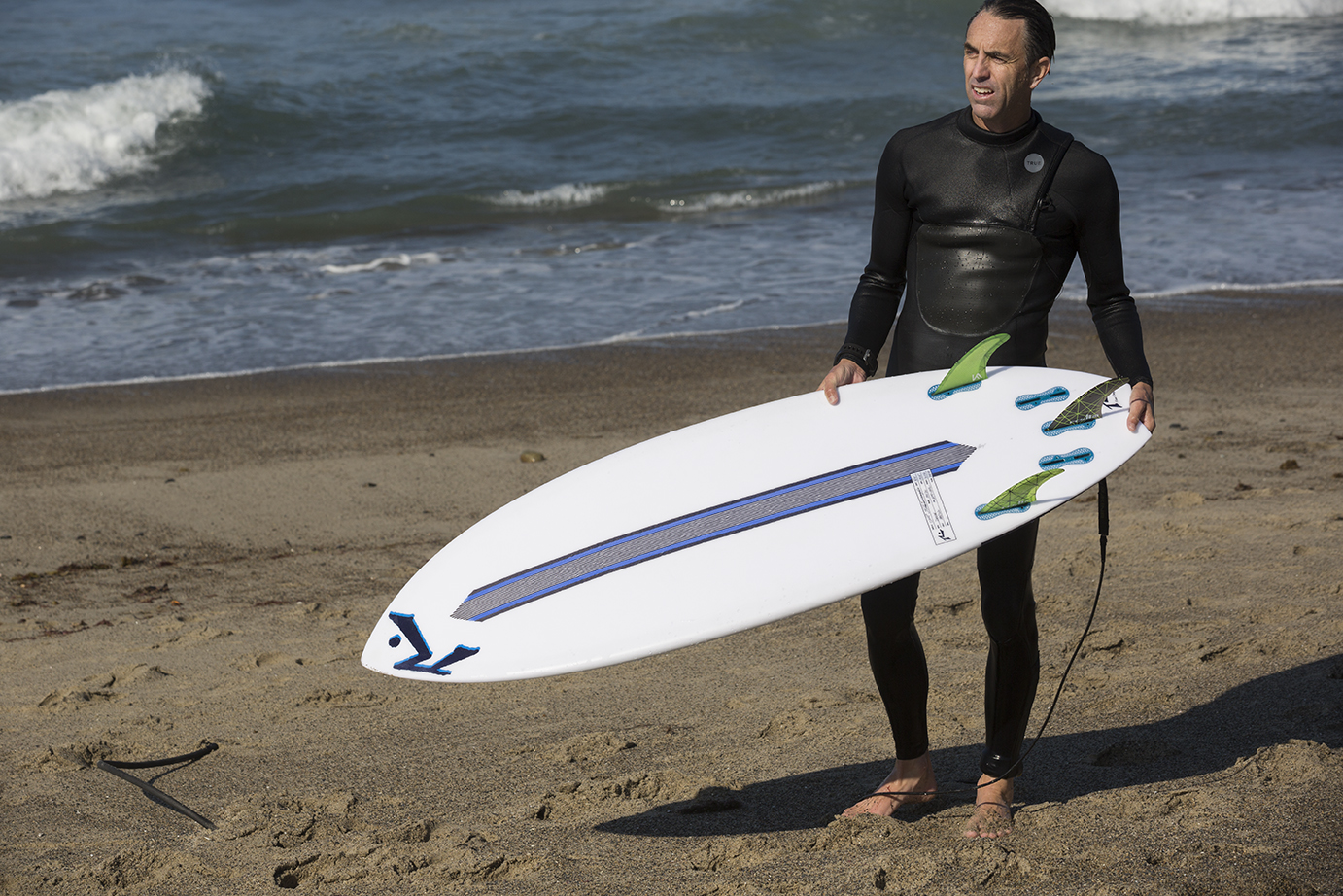 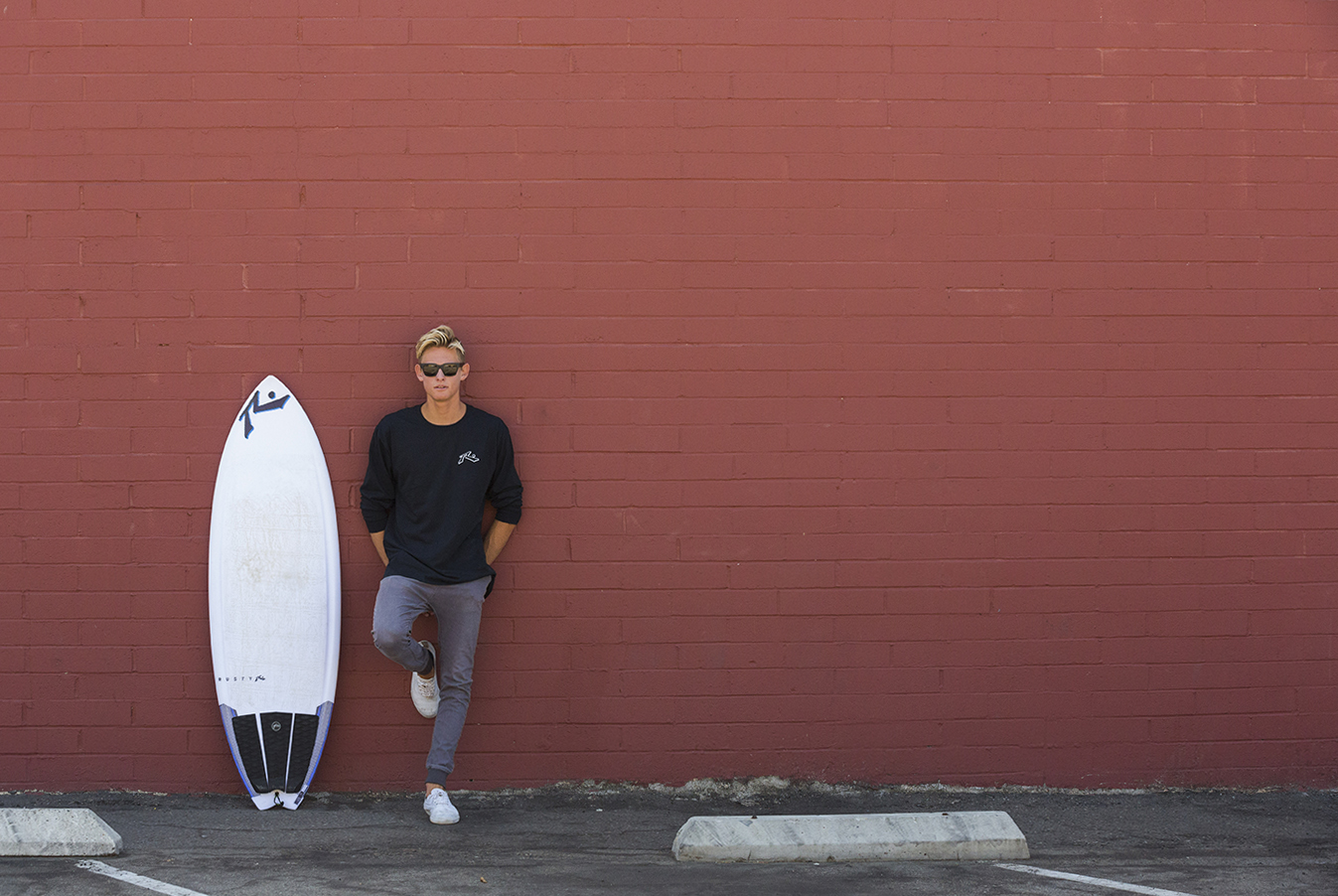 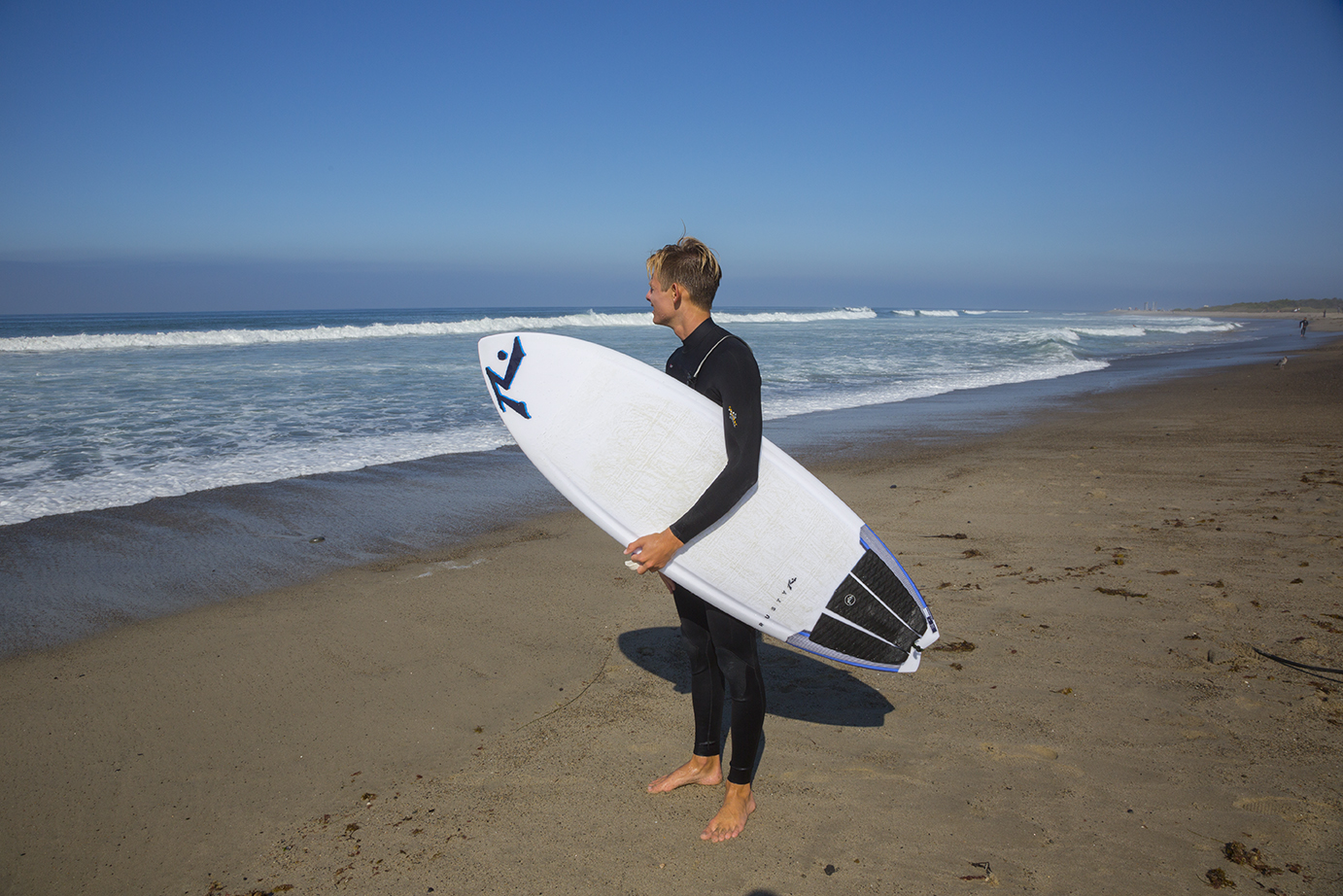