The Pyzel Pyzalien is Jon Pyzel’s most popular shortboard design ever for small to medium surf.

The Pyzalien is one of our best loved designs ever!

The Pyzel Pyzalien is Jon Pyzel’s most popular shortboard design ever for small to medium surf.

The Pyzalien is one of our best loved designs ever!

Is it a shortboard? Is it a step down? Is it a hybrid? No …it’s a Pyzalien! Jon Pyzel’s wickedly popular Pyzalien design handles surf 1-8ft, and tackles the range effectively. This board is not the newest board in the Pyzel lineup, but even Pyzel himself is quick to admit, people just keep ordering it! It’s a great pointy nosed go-to board that covers you for almost anything from grovel to overhead. It’s wider nose outline, flat deck, full rails and wider tail give incredible planing, acceleration, speed and glide (as well as stability).

We have three points of view of how the Pyzalien surfs: First is Jon’s feedback of how wildly popular the board is, even though he’s released several new designs since the Pyzalien. The second would be watching Jim Cicero use his Pyzalien in El Salvador at Las Flores and Punta Mango. The third would be our own personal sessions on our Pyzaliens here in Cape Hatteras...

Jon’s feedback is that this board “just works” and that’s why people don’t want to change when ordering a new board. They just order a new Pyzalien to replace their older Pyzalien. Jon has kept the design current, as well as adding some spice with different tail options including squash, swallow, thumb and diamond. “People just love their Pyzaliens and they don’t want to risk switching to something else”.

Our next source of feedback on this board was surfing with Malibu resident Jim Cicero in El Salvador earlier this year. Jim was surfing his Pyzalien through the entire range of surf we experienced during the trip, from crumbly, blown out thigh high insiders to head high peaks at the points of Las Flores and punchier Punta Mango. 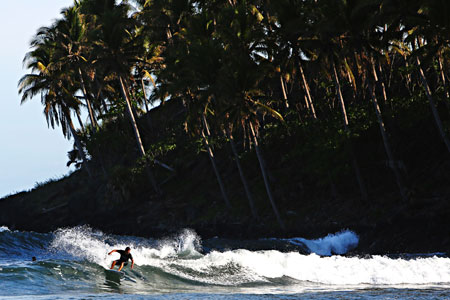 Jim mainly rode his board as a quad, and rode it all the way down to where we were riding grovel type hybrids like the Lost Lib Tech Puddle Jumper and even a Robert August Longboard.

On the flip side, Jim used the same board at punchy head high Punta Mango. We don’t have to say much since the pictures will do most of the talking. From dribble to barrels, the Pyzalien covered everything thrown Jim’s way. It was a smaller week of surf (by El Sal’s standards) but honestly that’s what most of us would call a great week of surf at home. 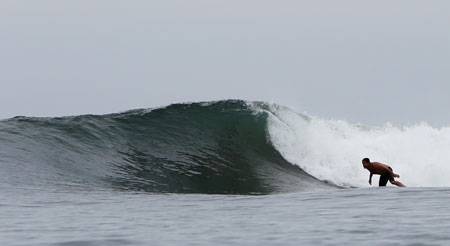 Our sessions on the Pyzalien around Cape Hatteras consisted of several weeks of sessions in the thigh to shoulder high range, some of them not so juicy and others with a good bit of push. This board paddles well and gets into waves early with noticeable speed thanks to the single concave up front. We mainly rode our boards as thrusters, as most of the waves were a-framed beach breaks where you didn’t want the extra quad speed racing you away from the pocket. Even though the rocker is conservative, the nose isn’t super flat and this helps when you are surfing in more hollow conditions. At the same time, the flat deck, fuller rail and wider tails on these boards help produce lift and speed in average to sub par days. From thigh high soft runners to punchy shoulder high beachbreaks, the Pyzalien never hit a performance wall, making it believable that the board will perform from 1-8ft under the right feet.

The Pyzel Pyzalien has a flatter deck with full rails. Don’t be tripped out by the thin looking dimensions. My personal boards are rarely thinner than 2.75” and my Pyzalien’s thickness is 2.625”. This is right in line with what Pyzel recommends, …going about an 1/8 thinner than your daily boards. Even though the number is smaller, the rail in your hand is actually thicker. That’s because the Pyzalien carries that thickness from the stringer closer to the rail and then carries a much fuller rail than a board with more taper. This allows the board to remain conservative on the width (for faster rail to rail surfing) but also have the on demand speed from the thicker rail to push on in the turns.

The Pyzalien is also available in Firewire FST build technology and this set up is awesome for a travel board that you know will get the tar beat out of them, as well as a dual purpose kitesurf/surfboard. Many of our staff at REAL have a Pyzel in FST tech and swear by it for both surfing and kitesurfing.

It’s got a pointy nose, but not super narrow. It works in small waves and juicy waves. It works as a thruster and a quad. It just works...period.