The Metamorph is a Robert's model that fits in the daily driver category. It has the volume and paddle power of a groveler but has a narrower plan shape to allow it to be surfed more aggressively in the pocket. This is a hybrid done right. 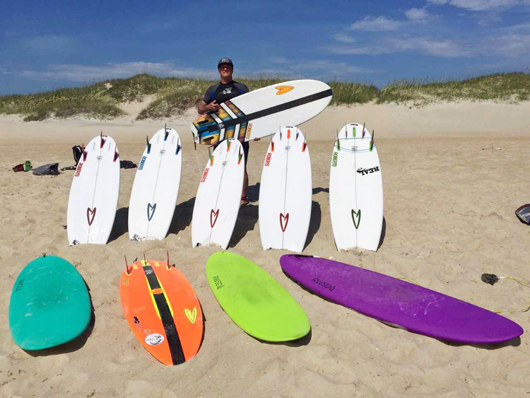 
Tech specs:
•Hybrid Daily Driver
•Single concave to extreme double concave
•Round tail
•Five fin boxes– Run it as a quad or thruster
•Low rocker forward of the tail with a flip in the nose

The Metamorph did not disappoint and responded well to being driven hard off the bottom and flew down the line. The round tail and accentuated double concave that runs off the tail help the board hold in the face on steeper drops and launch you into the first turn. The board feels stable off the bottom, but not too sticky to go vertical on the first turn if the wave allows. When surfed in waist high peaky beach break, it got into waves early and had positive down the line drive. This is not a skatey groveler, but it does pick up speed as it's pumped down the line similar to a board with a wider tail.

We surfed the Metamorph with a Roberts Generation thruster set and the Roberts Generation quad.
In the smaller waves, the thruster felt like it had more get-up-and-go. The waves we were surfing required getting down the line fast in order to make sections. The thruster setup worked well with the extreme double concave to make the board pick up speed quickly. The board had a good responsiveness that made quick turns up the face possible at speed, which felt epic on the closeout end section.
When surfed as a quad the board had less ability to pick up quick down the line speed. It felt like the quad combined with the tail and bottom shape made the board hold more in the pocket and match the speed of the wave. This would be great to have in larger barreling surf where you want to get under the lip and let the board sit deep in the pocket.

You’re looking for a board that will speed down the line, get you a lot of waves and blast sections that a groveler would bog on. The volume in this board is distributed in a way that makes it feel floatier (easier) than it is, which makes it perfect for lazy Sunday surfs or stepping down from a bigger board. The smaller you ride it, the more responsive it feels on rail, so if you're looking for a daily driver, size it at your optimal volume or even a little under. Robert Weiner put it best, “If you want a board that thrives on speed and lives to destroy, discover the Metamorph.”


We wanted a board that can generate speed in small waves and control speed in waves where other grovellers might lose their hold.

Roberts Description
A transformation, the hybrid groveller. Out of its cocoon, our Metamorph takes the small wave groveller to another form.

We wanted a board that can generate speed in small waves and control speed in waves where other grovellers might lose their hold. Inspiration came in the form of one of our most popular small wave boards, the Mutant. The Mutant crept its way into being a primary board for many and they took it to the limit. Like its predecessor, the Metamorph has low rocker forward of the tail area for speed with flip in the nose that doesn't hang up coming out of turns. In the rear, we opted for a thinned and tapered round tail with a hint of rocker. This gives it less surface area in the tail and a longer rail line to control speed going into tight turns or on better waves than what you'd find on just a grovel day. The bottom contours of the Metamorph start out as a single concave that blends into an extreme double concave that exits out the tail for lift and aiding the control of higher speed turns. If you want a board that thrives on speed and lives to destroy, discover the Metamorph.

ROCKER
Flat overall rocker with a touch of entry rocker and flip in the nose and hint of rocker in the tail.

BOTTOM
Single to extreme double concave out the tail.

FINS
Five fin is standard, works wonderful as twin, twin plus trailer, thruster or a quad.