Anyone that has been paying attention to foiling has seen Kai Lenny blowing up the internet with his insane foiling capability on the Naish Thrust. Naish worked hard to develop a product that would meet his demanding specs and Kai could not be more stoked with the stock Naish Thrust Surf Foils. Depending on the discipline, he is is riding the MD or the LG foil. 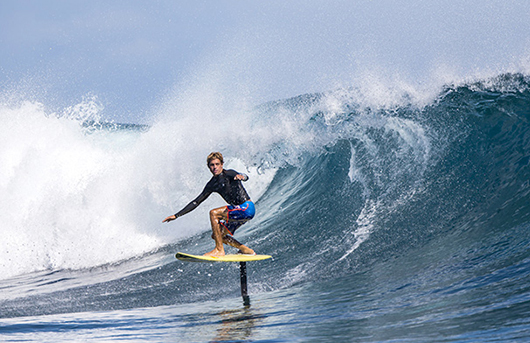 The Thrust comes with all the parts and pieces that you need to get on the water and the ability to change the mount from the pedestal bast to Tuttle or Deep Tuttle box will ensure you can fit this foil to any craft you want. Naish ships the Thrust stock with the pedestal base because it gives the rider more adjustability to slide the foil position on the board as well as it is a stronger way to attach your foil to the board. 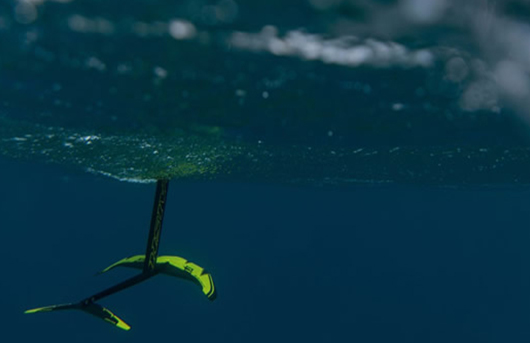 The Thrust comes in two sizes, the Medium and Large. The only difference is the surface area of the front wing. Just like an airplane a larger wing creates more lift and flies at lower speeds. Most mid to larger size people like the Large wing for surf and SUP. While smaller riders using this foil in larger surf prefer the Medium wing.

The most notable thing about surfing the Thrust is that you generate speed through turns. It also generates a lot of power by pumping the board up and down. Unlike some other foils, as you turn, pump and make your way down the line you continue to generate speed which will keep you on foil.

The mast length is the perfect size for surf foiling. Not too short or long. You have enough length so you don't come flying out of the water, and it is also short enough so you don't hit the bottom when you are riding through shallow waters.

The Large wing has a lot of lift and is really stable. If you are riding more powerful surf you might want to check out the Medium wing. The Medium wing will have less drag for paddling and better waves. The size chart is accurate so pick by your foil based on your weight and you will be set up with the right one.

The Thrust is a killer foil for kiteboarding. Most people will want the Medium wing as the Large wing has a ton of lift. The Large will buck you off if you don't know how to stay forward over the wing kiteboarding. If you know how to foil you can ride the Large, but if it is your first time it will be more difficult. Most people getting the Thrust for cross over Surf/Kite foil are going with the Medium front wing. Also the Large will top out at about 16mph where the Medium you can get up to around 20mph.

These foils are really stable for kiting and you will be nailing your transitions on foil with ease in no time. With the Thrust we never found ourselves outrunning the kite like we do on kite foils with smaller wings. You feel perfectly balanced and in control at all times.

If you want to get more performance from the Thrust you can add on the 70cm or 90cm accessory mast so you can lean the board over more and have even better upwind ability. The longer mast really helps with kiteboarding in choppier conditions so you can ride above the chop.The back wings on this foil are down turned which means if you are continuing to grind this foil into the bottom you can catch that back wing and damage it. 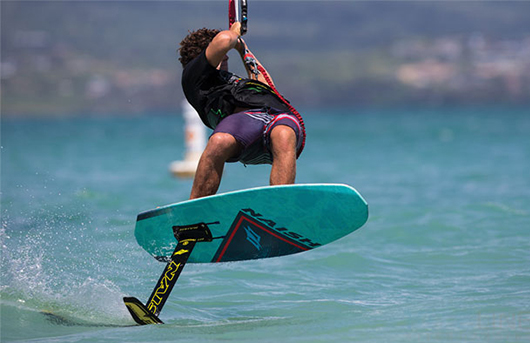 How the Naish Thrust Foil wakeboards:

This foil is a blast behind the boat. You can pump in the wake or glide out into the flats and then come back to the wake for more power. Sizing the Thrust for wakeboarding is similar to what you would do for surf. Pick the size base on your weight. Similar to kiteboarding, you want to make sure you start the boat really slowly as the Large foil pushes back hard if you don't have some weight to push against it.

Since the Thrust generates so much speed pumping through turns, you can ride wake to wake and in and out of the wake without the rope for as long as your legs will hold you up. This foil will transform your days on the boat into a mind-altering day on the water.

Why you want the Naish Thrust:

The Thrust is a top quality product that is proven to work for all disciplines. You can multisport on it and switch out the accessories to match up with any board on the market. We can't promise that you will be riding like Kai Lenny because you own a Thrust, but you will be having a killer time on the water in what used to be unrideable conditions.

Naish's Description
Designed in collaboration with Kai Lenny, the Thrust Surf Hydrofoil develops lift at low speed, and launches with minimal effort. The combination of early take-off and excellent maneuverability makes it great for waveriding, cruising or racing. The extra long fuselage creates a large sweet spot and provides stability, while the downturned stabilizer (rear foil) makes waveriding and turning intuitive and easy. The small (55 cm) extruded alloy mast can be retrofitted to any style box system. Whether surfing or downwinding, the Thrust Surf Foil will keep you stoked session after session!